Well, okay, it's really four generations, but probably not all linked in direct order, oldest to youngest.

There is a set of three armorial stained glass windows in the Glasgow Cathedral which memorializes three generations of a branch of the Douglas family.

The center of the three windows bears the legend:

The coats of arms in the three windows, going from left to right, are: 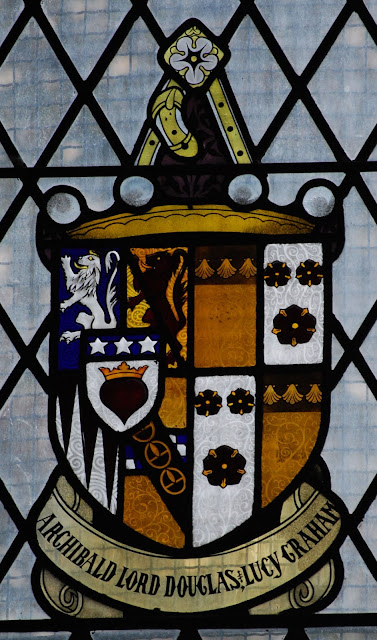 Archibald James Edward Douglas, 1st Baron Douglas (1748-1827), was a Scottish politician. He was MP for Forfarshire from 1782 to 1790 and Lord Lieutenant of Forfarshire from 1794 to 1827. In parliament he was a loyal follower of Henry Dundas and William Pitt, and hoped to be rewarded with a peerage. Although he would have preferred an earldom, he was created Baron Douglas, of Douglas in the County of Lanark, in 1790.

Lord Douglas married first (1771) Lady Lucy Graham (1751-1780), daughter of the 2nd Duke of Montrose, and secondly (1783) Lady Frances Scott (1750-1817), sister of the 3rd Duke of Buccleuch. He had nine children (five sons and four daughters, most of whom reached old age). Douglas died on 26 December 1827 at Bothwell Castle, Lanarkshire. He was buried in Douglas parish church in the same county.

The arms of Douglas of Douglas on the dexter (left) side of the shield are blazoned: Quarterly: 1, Azure a lion rampant argent crowned with an imperial crown or (Galloway); 2, Or a lion rampant gules surmounted by a ribbon in bend sable (Abernathy); 3, Argent three piles gules (Wishart); 4, Or a fess checky azure and argent surmounted of a bend sable charged with three buckles of (Stewart of Bonkill); overall on an escutcheon Argent a heart gules crowned or on a chief azure three mullets argent (Douglas of that Ilk).

The paternal arms of his wife, Lucy Graham, are blazoned: Quarterly: 1 and 4, Or on a chief sable three escallops or (Graham); 2 and 3, Argent three roses gules (Montrose). 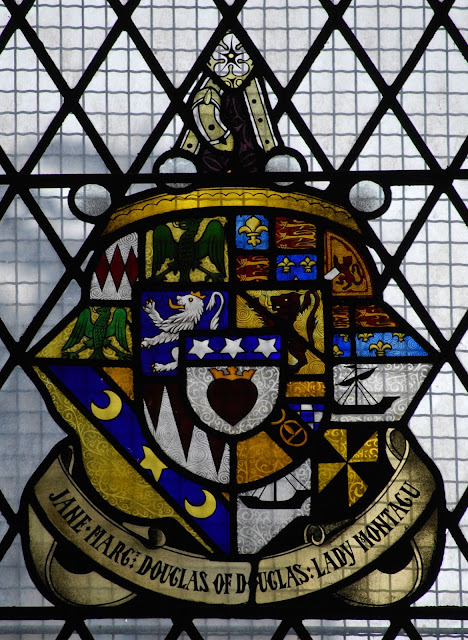 Of his four daughters, who all married, only one left issue, the Hon. Jane Margaret. She married Henry, Lord Montagu, second son of Henry, third Duke of Buccleuch. Lady Montagu succeeded as heiress to the Douglas estates in 1837.

The arms of Lord Montagu (with Douglas in pretense), include in the second quarter the Royal Arms of Charles II debruised by a baton sinister argent (James Crofts, Duke of Monmouth, was an illegitimate son of Charles II), Campbell in the fourth quarter, and in the third quarter, Or on a bend azure a mullet of six points between two crescents or (Scott). 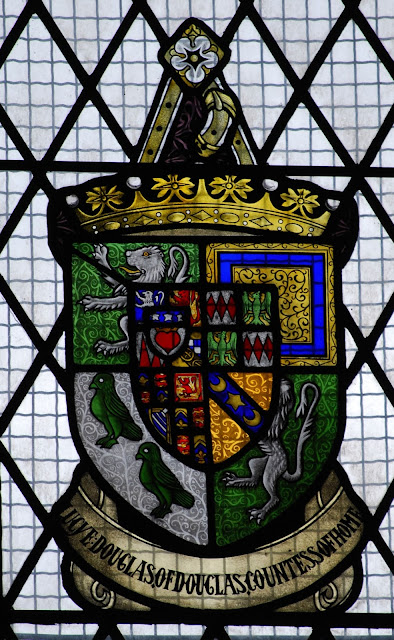 The eldest of Lady Montagu's four daughters succeeded on her death, and married Cospatrick Alexander Home, 11th Earl of Home, who in 1875 was created a baron of the United Kingdom by the title of Lord Douglas of Douglas. Their eldest son, Charles Alexander Douglas Home was the 12th Earl of Home and Lord Douglas in 1888 edition of the Dictionary of National Biography and had possession of the Douglas estates at that time.

The Earl of Home's arms are: Quarterly: 1 and 4, Vert a lion rampant argent (Home); 2, Or an orle azure; 3, Argent three popinjays vert beaked and membered gules (Pepdie of Dunglas); with, of course, an inescutcheon of pretence for Montagu.

Three generations of Douglases, with increasingly complex heraldry as heiresses transmitted the Douglas arms to their children.

There are a number of photographs of memorials and effigies of members of the family, including an effigy of and a stained glass window with the arms of Lucy Elizabeth Montagu Douglas of Douglas, Countess of Home (1805-1877), on a webpage of St. Bride’s Church, Douglas, Lanarkshire, at http://www.douglashistory.co.uk/history/photogallery/stbrides_douglas/real_p.htm


Finally, in a window in another part of the Cathedral presented in 1958 by The Cameronians Regiment, and listing all of the regiment's engagements in World War II, we have this display of arms: 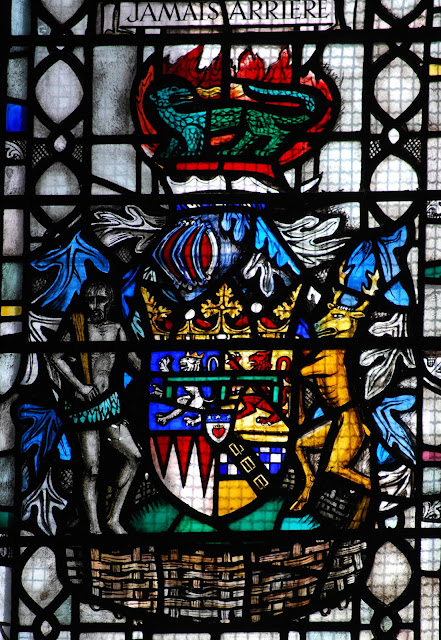 The quarters are all those familiar to us from Douglas of Douglas above, with the addition of a label of three tags vert. The coronet atop the shield is that of a Marquess. The supporters are a wild man proper and a stag rampant or. The crest (the same as one of the two used by the Earl of Home) is On a cap of maintenance proper a salamander vert encircled with flames of fire also proper and the motto, Jamais arriére (Never behind). Both crest and motto are associated with (no surprise here!) Douglas.

I have not, at this point, been able to determine the owner of these arms. As a peer, you'd think he'd appear (pun intended. Sorry!) in my Burke's Peerage of 1938, but he's not there under Douglas, nor Home, nor Buccleuch (this last I knew would be a stretch, but I looked anyway). But without knowing his title, I'd have to thumb through the 3,000+ pages of that book looking for this coat of arms, and I'm not ready to devote that much time to this hunt right now.

In any case, it's a great display of heraldry and deserves its place here with the other, older Douglas memorial glass.