The next stained glass memorial in Glasgow Cathedral we're going to look at is a particularly touching one, as it is a memorial by a married couple to three of their deceased children.

The window bears the following legend, which tells you just about everything you need to know:

This window replaces an earlier window
by James and Catherine Hozier, in
memory of their children, Catherine
Haughton, John Wallace, and James
Edmund, 1857, and incorporates the
coat of arms from that window.


The coat of arms is this one: 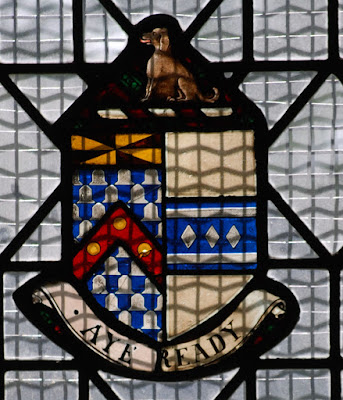 The blazon of this marshalled coat of arms is: Vair on a chevron gules three bezants, a chief gyronny of eight or and sable [the window makes the chief gyronny sable and or, thus reversing the tinctures] (Hozier), impaling Argent on a fess cotised azure three lozenges argent  (Feilden). The crest is A bloodhound sejant proper, and the motto is Aye ready.

According to An Ordinary of Arms by Sir James Balfour Paul, the Hozier arms were granted in 1824 to "James Hozier, advocate." The listing for Feilden (which is English, not Scottish) in Burke's Peerage and Baronetage indicates that there should be two martlets and a rose, all gules, on the shield, and that the lozenges on the fess should be or rather than argent.

The children of James and Catherine Margaret (Feilden) Hozier were:

I did not find a records of James Edmund Hozier, and presume that he died in infancy.

It was not uncommon at the time that, if a child died young, the next child born of the same gender was given the name of the deceased child. Hence the two John Wallace Hoziers above. Indeed, the use of necronyms, as they are called in genealogical circles, were fairly common in New England in America, too. My great great grandfather was married twice; he lost his wife Caroline and young son, Herbert Eugene Warren, while in his early twenties. Later, remarried, he named the only son from that union, and my great grandfather, Herbert Eugene Warren.

All in all, a touching memorial from the parents of three of their children.