A Stained Glass Memorial to a Wife


Continuing our survey of some of the heraldic stained glass in Glasgow Cathedral, we come to a window with the following inscription:


This window replaces an earlier
window to the memory of
Margaret Shortridge, wife of James
Burns of Kilmakew, who died on
6th March, 1850, and incorporates
the coat of arms from that window.


(The inscription bears an error; it should read James Burns of Kilmhew.)

The coat of arms shown in the window for this couple is: 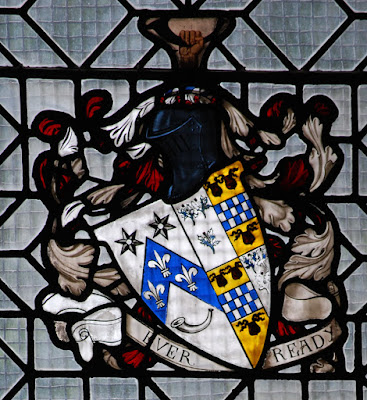 The Burns arms (on the dexter side of the shield, to the viewer's left) are found in Burke's General Armory, and are blazoned Argent on a chevron azure between two spur rowels and a hunting horn sable, three fleurs-de-lis argent. The crest is A hand holding a hunting horn proper, and the motto is Ever ready.

I do not find the arms of Shortridge in any of the usual sources: Burke's General Armory, An Ordinary of Arms by Balfour Paul, An Ordinary of Arms, Volume II, or the new An Ordinary of Scottish Arms by Malden and Scott. From what I can determine from the window, the arms appear to be: Quarterly: 1 and 4, Argent three thistles slipped and leaved proper; 2 and 3, Or a fess checky azure and argent between three wallets [stringed] proper. I have to presume that the second and third quarters are a cadet of Stewart (Or a fess checky azure and argent). The wallets, which reasonably closely match the illustration in Elvin's A Dictionary of Heraldry, might also be a peculiarly Scottish version of a wallet, a sporran.

Margaret Shortridge, who is memorialized in this window, was the daughter of William Shortridge, of the old Spreull-Shortridge family. She was born about 1805. She married James Burns, son of Reverend John Burns and Elizabeth Stevenson, on the 2nd of June 1835.

James Burns, her husband, was the sixth son and eighth child of the Rev. John Burns, D.D. and Elizabeth Stevenson, daughter of John Stevenson, brewer in Glasgow. He was born in the "Holy Land" (a land or tenement of houses on north side of George Street, a little west of North Portland Street. It got its name from the number of ministers living in it) on the 25th of June, 1789. After the usual education at the Grammar School and the College he went into business, and was for some time a partner with John Duncan.

This image below is a drawing of James Burns of Kilmahew done by Edward Burton. 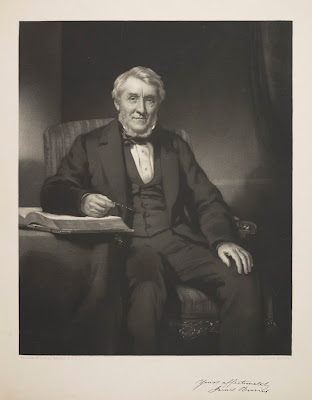 He retired from active business and developed an interest in estate improvement, acquiring the estates of Kilmahew, Cumbernauld, and Bloomhall in Dunbartonshire. He spent much time on improvements and was a liberal supporter of religious and philanthropic enterprises. He lived out his later years at Kilmahew, near Cardross, where he died on September 6, 1871. He was married twice: first to Margaret Smith (no issue), and secondly to Margaret Shortridge, who bore him one son, John Burns, who inherited his father's estates and became chairman of the Cunard Line.