Is There Such a Thing As "Skyscape Heraldry"?


Over this past weekend the regional airport nearby hosted this year's "Wings Over Dallas" airshow. Because it was close, and because I've long had a love of World War II aircraft, and since the folks putting it on - the Commemorative Air Force* - were advertising a whole bunch of these flying antiques, including a B-29, a B-17, a P-51, a C-47, two B-25s, 2 A-26s, an F4U Corsair, a P-40, a P-39, and a P-63, among others, as well as a chance to hear from 101-year-old Dick Cole, the sole remaining Doolittle Raider, well of course, we simply had to go.

Naturally, there was a whole lot of stuff for sale, which for the most part I valiantly resisted. But there was one item that I concluded I just had to bring home with me, because it had a shield on it. So the following baseball cap is not a part of "heraldic caps" collection. 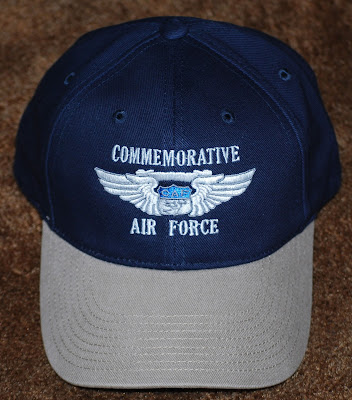 This close-up shows the shield a little better. 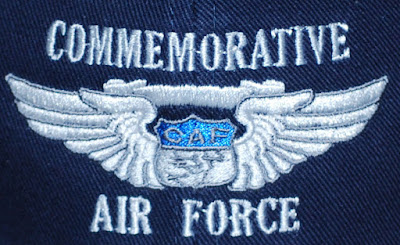 And here's a nicely detailed graphic of the CAF's logo that I pulled off the internet.

As you can see, it technically isn't "landscape" heraldry, as there is not a bit of land in sight. Hence my question in the title: "Is there such a thing as 'skyscape heraldry'?"

Based on this shield, I think the answer is going to have to be "yes, Virginia, there is such a thing as skyscape heraldry."

The shield in the on-line logo (but not on the hat) appears to be hatched as well as partially colored. If pressed, I would blazon it as Azure a P-38 Lightning, an F4U Corsair, and a P-40 Warhawk, a gore sinister representing clouds [could we call it a "gore sinister of clouds"? Normally, "nebuly" represents clouds, but this isn't nebuly, it's just clouds) all argent, and on a chief azure the letters CAF also argent.

Yes, I know that this makes the chief "color on color" (indeed, it is "azure on azure," thus really reducing the identifiability of the charge). Still, if we were to just go by the cap, the planes and outline of the clouds are "silver on argent," which is no better. In the end, I think we're just going to have to go with "faux heraldry" and leave it at that.

Nonetheless, it's a new cap with a shield on it, and I'm keeping it in my collection of heraldic caps, and am even planning on wearing it periodically!


* Founded in the mid-1950s, the organization used to be the "Confederate Air Force," but they decided that the name (which began as a tongue in cheek joke) was confusing in that it didn't accurately reflect the purpose of the organization, and it was hindering their fundraising efforts. On January 1, 2002, they officially changed the first word to the more appropriate "Commemorative."