I know, I know! I promised you heraldic stained glass, and here I am, still telling you about heraldic brass in Glasgow Cathedral. But, really, I thought I was ready to move on to the windows, but I keep finding these brasses in amongst my photographs, and truly, there's just a few of them, and there are so very many stained glass arms that it just seems easier to me to try to finish up the heraldic brasses before tackling the mountain of armorial glass. So there you have my only excuse, in a nutshell. 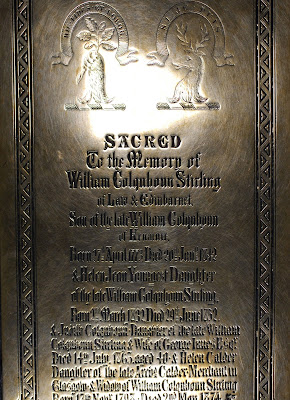 The crests and mottos can be seen in detail here: 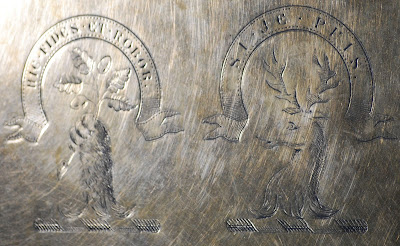 The crest to dexter (left) is A lion's jambe erased holding an oak branch fructed proper, with the motto Hic fidus et robore (He is faithful and courageous), for Stirling.

The crest to sinister (right) is A stag's head erased proper, with the motto Se je puis (If I can), for Colquhoun. (Is it just me, or does that stag's head have a "deer in the headlights" look to it? You should be able to click on the image to get a larger version that shows it more clearly.)

The Chiefs of Colquhoun and Their Country by William Fraser (1869) says only: "William Colquhoun Stirling of Law and Edinbarnet. He was a surgeon in the service of the East India Company. He married Helen, youngest daughter of Archibald Calder, a banker in Glasgow."

The Stirling Genealogy (1909) adds a little more information, in addition to hyphenating the surname as Colquhoun-Stirling: "He was for some time surgeon in the service of the East Indian Company. On July 23, 1818, he was served heir of Mrs. Agnes Hamilton or Stirling. He married Helen, daughter of Archibald Calder, banker of Glasgow, lineal descendant of the Calders of Inchbreck. William died in January, 1842, and was succeeded by his son [William Colquhoun-Stirling of Law]."