An Heraldic Memorial to a Fallen Officer


We spent literally hours in the Cathedral in Glasgow, there was so much to see (and so much of it heraldic!). I doubt that I am going to be able to give you what I would term a "complete tour" of the heraldry in Glasgow Cathedral, but I am going to share some that caught my attention, and I hope that you will find it of some interest, too.

The first example is a monument erected in 1829 by his brother officers to the memory of Lieutenant John Stirling of the Bombay Army, who fell the year before (age 23) while leading an assault on the Fort of Dundhootee, India. 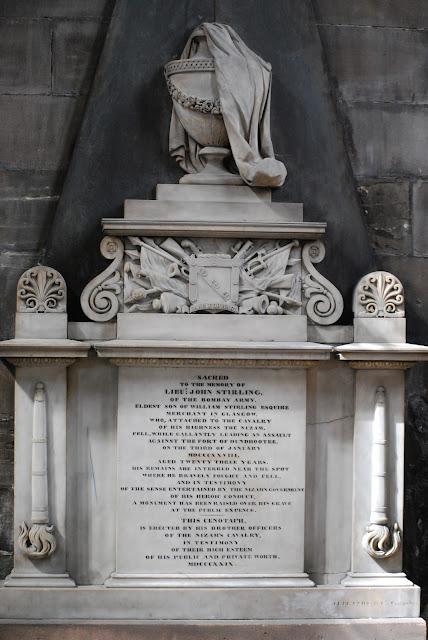 He was the son of William Stirling, Esq., a Glasgow merchant.

The coat of arms (lacking a crest; it appears to have gone missing in the ensuing years, as I think I can see a small attachment for it, and the torse is quite visible) appears on the upper part of the monument in front of what is often termed a "trophy": a display of flags, swords, rifles, pistols, daggers or bayonets, trumpets, spears, cannon barrels, cannon ramrod, and cannonballs. Burke's General Armory gives for Stirling of Glasgow: Argent on a bend sable three buckles or all within a bordure sable. (The arms here are further differenced by eight crescents on the bordure, presumably argent.) Burke gives the crest as: A hart's head azure, and the motto (as above) Gang forward.

It is, all in all, a very touching tribute to a very young man done with a level of quality which demonstrates the esteem to which he must have been held.