Small Brass Memorial to a Campbell


Okay, this is the next-to-last brass that I am going to inflict upon you before getting to some of the armorial stained glass in Glasgow Cathedral, I promise!

This particular brass, not terribly large, is dedicated:

James Campbell of Newton Lodge was a West India merchant and a brother of Alexander Campbell of Hallyards, with whom he purchased an interest in a sugar refinery in Glasgow, where they traded under the name of the Newark Sugar Refining Co. in 1814. 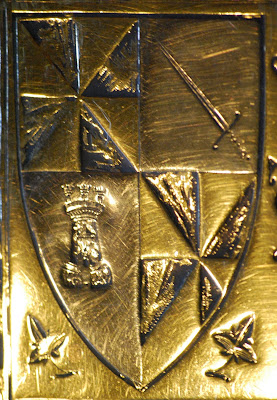 The arms (not hatched) shown here are different that those granted in 1814 to Campbell of Hallyards (his nephew, perhaps?), but assuming the same tinctures as that later grant, would be blazoned as: Quarterly: 1 and 4, Gyronny of eight or and sable; 2, Argent a broadsword in bend gules hilted sable; 3, Argent a castle triple-towered sable.

The 1814 grant to Campbell of Hallyards had a ship in the fourth quarter, placed all the quarters within a bordure argent, and added in the center of the shield on an escutcheon sable a boar's head erased or.

There is also a memorial window to James Campbell of Newton Lodge to be found in the Cathedral. 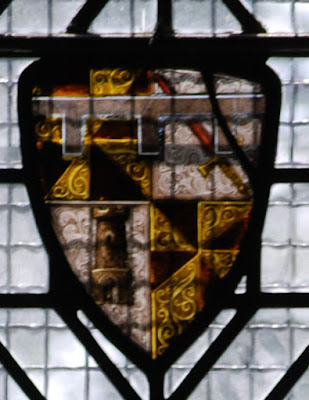 The window bears the legend: "This window replaces an earlier window to the memory of James Campbell of Newton Lodge who died 15th Dec. 1830 and incorporates the coat of arms from that window."

We'll see some more Campbell arms, including some near and dear to my heart because they have a camel's head crest, Campbell of Succoth, when we get to reviewing the armorial stained glass in the cathedral. Soon, I promise!