No, Really, There _Is_ a Coat of Arms on This Monument


It's not quite as obvious on this memorial in the Glasgow Cathedral (to another military man) that it displays his coat of arms, but really, it is there! 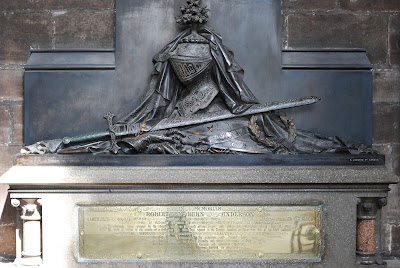 I mean, sure, you can see the helm, mantling, and crest easily enough, but a coat of arms?

This memorial is dedicated to Robert Burn Anderson, Lieutenant in the 1st Bombay Fusiliers and later Adjutant in Fane's Horse, the second son of John Anderson, a merchant of Glasgow, born on October 14, 1833, and who died September 27, 1860 (so a fortnight short of his 27th birthday), in Peking (now Beijing), China, "a victim to the cruelty of a barbarous Foe." He had been "Treacherously taken prisoner by the Chinese, when in command of an escort, and under the protection of a flag of truce." His body was buried in the Russian Cemetery in Peking. 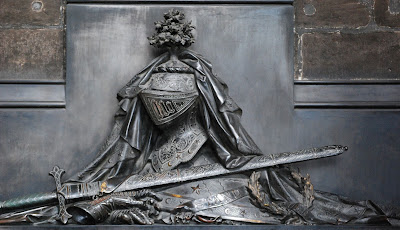 Here is the armorial portion of the monument. You can make out that the helm (and if you look closely, the mantling) has a border around its base of alternating mullets and crescents. 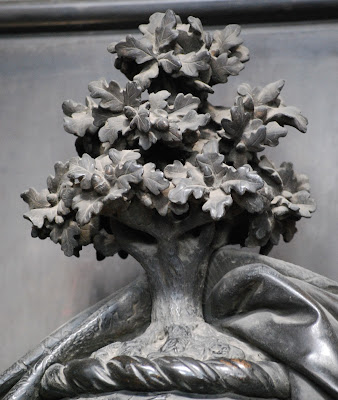 The crest atop the helm is a beautifully cast and highly detailed oak tree.

And here, almost hidden away beneath the mantling, sword and scabbard, gauntlets, and hero's laurel, is the shield. 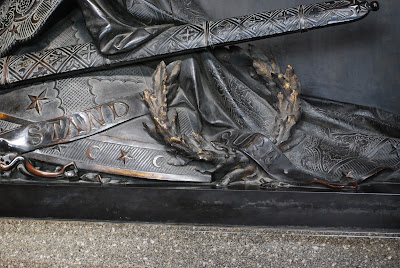 It appears to be a variant of many Anderson arms in Scotland. The closest I found was in An Ordinary of Arms by Balfour Paul (often referred to as the Lyon Ordinary I), entry 4952, Anderson of Dowhill (1672-7): Argent a saltire engrailed between a crescent in chief and three mullets in the flanks and base gules within a bordure azure. (Balfour Paul gives no crests or mottos; Burke's General Armory has Azure a saltire engrailed sable beween a crescent in chief two mullets in flank and a boar's head erased gules in base with the crest An oak tree proper and the motto Stand sure for Sir Alexander Anderson, Lord Provost of Aberdeen, 1672. 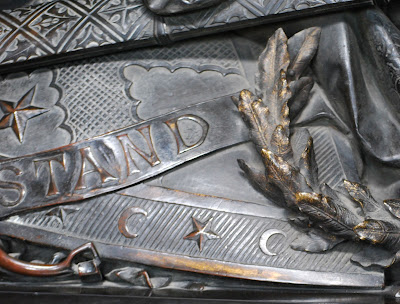 Because of the way the shield is placed and partially covered, the best that I can make out for a blazon of these arms is Argent a saltire engrailed sable between [well, if you look very closely you can see that there is a mullet in each of the flanks] a bordure azure semy of mullets and crescents pendent alternating [argent?]. (The edging of the helmet and the mantling is Azure semy of mullets and crescents - not pendent - alternating.] So most likely a differenced version - with mullets and crescents on the bordure - of Anderson of Dowhill, but without being able to see the remainder of the charges around the saltire, I can't confirm this.

In any event, it's a beautifully rendered monument with highly detailed cast pieces and clear hatching on the shield and helmet, with a thistle and rose motif on the lower portion of the helm and thistles on the scabbard.