Some Unusual Memorial Heraldry at Peterskirche

I'd love to know more about the following memorial.  The inscription is hard to make out; in the topmost (and best preserved) of three panels of inscriptions, about 1/3 of the words are completely worn away, and the lower panels are progressively worse.  It would be hard to read even in my native language without the missing words, and the inscriptions here are in German in a German script.  Still, the arms are in fairly good condition, and I found them fascinating. 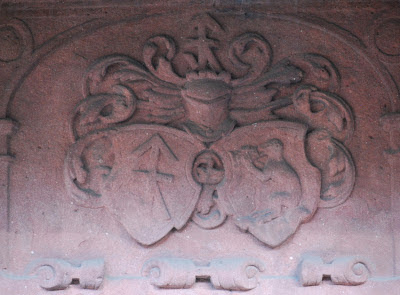 The left-hand shield (and the crest) consist of a rune-like symbol called a housemark (in German, hausmark, plural hausmarken).  As their name implies, these symbols were originally used to mark houses, before being moved onto shields as heraldry.

It's the other shield, the one on the right, that really intrigues me.  It looks like a bear (the face is too long to be a monkey, and it lacks the usual collar around that waist that helps to identify heraldic monkeys) sitting on a rock either drinking from a flask or playing panpipes, I'm not sure which.  (One of the first things it reminded me of was Winnie the Pooh about to get his head stuck in his honey pot!)  This is one of those coats of arms where you just know there's got to be a good story to it!

I didn't see this coat in a quick search of the Dictionnaire de Renesse, his ordinary of all of the arms in Rietstap's Armorial Général, but it's certainly possible that I missed something.  (Reading French, with many French abbreviations, is not my forte at all!)  And, of course, it's possible that these arms do not appear in Rietstap, and therefore not in Renesse.  As Pooh might say, "Oh, bother!"