Continuing with some more of the heraldic memorials found on the exterior of Peterskirche in Heidelberg, we have: 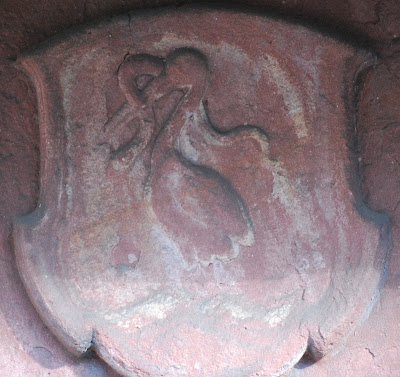 These arms, of a stork with a snake in its beak, are found on the monument to Joanni Pinciero Henricie Rauschen, died in his adolescence (moribus adolsescenti) in Heidelberg (well, Heidelbergæ) on January 8, 1593. 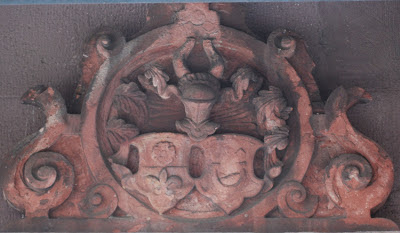 This monument is to Johann Simeon Torger, 1598, and Susanna (well, I can't quite make out the surname; it looks like Bieghift, but that doesn't sound quite right to me), 1606.

His arms are Per fess, a rose and a fleur-de-lis.  Her arms look to me to contain something that in English would be blazoned as a hulk, a mastless ship, which is blazoned in German a mastlose Kogge or a Kahn.  (According to my copy of Das Grosse Buch der Wappenkunst.)  It is possible that it might be an upside-down horseshoe, but a close inspection of the charge enlarged leads me to believe it is not.

It's a beautifully carved achievement, especially the way the mantling swirls and curls on either side of the helmet. 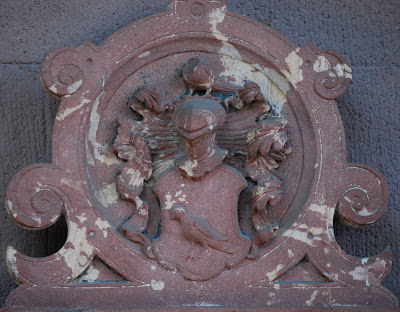 And here are the arms on the monument of Matthes Mais.  I could not find a date on the inscription.  The arms, however, are very simple: a field and a bird, possibly a dove.  The crest, following the usual German fashion, is a bird as on the arms.  (Carved in much deeper relief, the crest has lost its head.)