Before getting to some of the heraldry in the interior of Peterskirche in Heidelberg, I thought I'd share two more heraldic memorials with hausmarken (housemarks) on them. 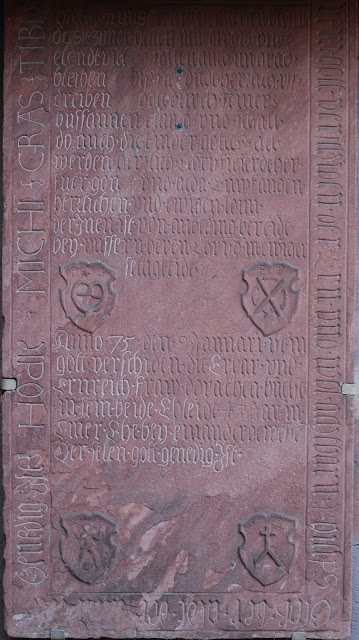 Some of the text in the upper part of the monument is missing; some letters have been "helpfully" defaced, I mean, highlighted in white for easier reading.  The only name I have been able to make out that I am sure of is Dorathea, perhaps Buchtin, who apparently died aged 75 years.

It seems to me very unusual to have a housemark issuant from a trimount, but given that a trimount appears in each of the other arms on this memorial, it may be theme or heraldic treatment within this family. 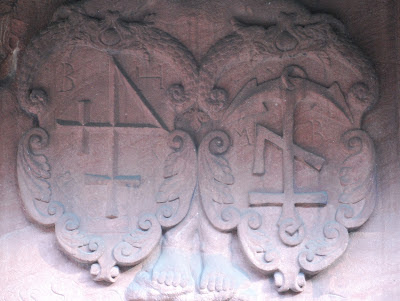 And here are two coats of arms, both with hausmarken on them.  The one on the right is done with an upside-down anchor; the one on the left a "purer" form of hausmark whose main element is blazoned, according to Das Grosse Buch der Wappenkunst, a vierkopfschaft (literally, 4 head shaft).  The crossarms of the upright and the horizontal would also be blazoned (something along the lines of erniedrigter Mittelkreuzbalken if I am reading it correctly).  It's a whole little subset of blazon within heraldry, one which I have not yet had the time to adequately learn.  Someday, perhaps, in my "copious free time."