In a post last week (March 13, 2013), I noted several news articles about the town of Deal in Kent, England, which had been told that the coat of arms they were using was not legitimately theirs to use, as it had been the arms of the (now defunct) Borough of Deal.

The town council has followed through on the plans noted then, and has adopted the arms of the Cinque Ports Confederation, differenced with the town motto, as their new coat of arms. 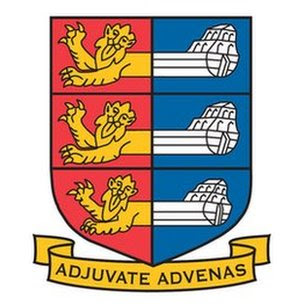 As you can see by the illustration of the "new" arms above, they did not - for which all of us, and not just Hastings, should be glad - adopt the arms of Hastings, which illustrated one of the earlier news articles that I pointed out in my March 13 post.  (Be that as it may, I'm not entirely happy with the illustration above; all of the renditions of the Cinque Port arms that I have ever seen - until now - did not have the black horizontal lines separating the three lions and three hulks.  I have no idea why the artist who drew this thought that they needed to be there.  Indeed, not even the vertical black line is necessary to the arms, but it at least has a little more reason to be there than the horizontal lines do, since it does divide the shield per pale.)

The full article about this adoption of these "new" arms can be found on-line at the BBC: http://www.bbc.co.uk/news/uk-england-kent-21862909