In several news articles from mid-February of this year, Deal Town Council and Deal Town FC, in Kent, England have learned the emblem they use is invalid because it is the old coat of arms of the Borough of Deal, which no longer exists. The council said all letterheads and road signs will have to be changed, costing thousands of pounds.  Deal mayor Marlene Burnham considers it "heraldry gone mad". (I'm guessing she considers it so because she doesn't understand how heraldry is supposed to work.) 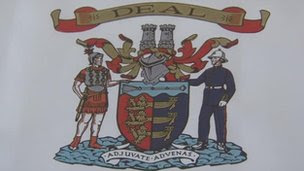 Deal Borough Council disbanded in 1974 and Deal Town Council was formed in 1996. According to the College of Arms, because the present town does not have the same area as the former Borough, a simple transfer of the arms is not possible.

Deal Town FC, which also uses the coat of arms, has been told the emblem on their shirts will have to go.  Club chairman Dayle Melody said: "Immediately we could just put a patch over the face of it and be badge-less, but that's not something we want to do. ... "It all depends how far the authorities want to go with regards to making us take it off. We've got five kits so that's £4,500 that we'd have to find to replace the kits."

A related article at KentOnline, noting the use of the arms by the Deal Victoria and Barns Close Cricket Club stitched into ties, blazers and on a large flag, is also entering the fight to keep using the Deal Borough coat of arms. 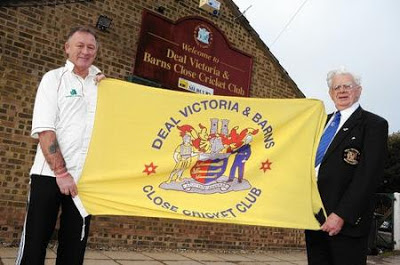 Fred Wilson, secretary of Deal Vics, said the club has known for years but continued using the logo without any enforcement from the college.  (This is, of course, because the College of Arms doesn’t really have any enforcement authority.  If they were located in Scotland, it would be an entirely different matter!)

"In 1994 we decided we were going to have it," he said. "We got a letter from the charter trustees saying you can use the emblem of Deal as your coat of arms. Just after that they found out that it hadn't been registered with the college who register them." He added: "People should be pleased to see that so many organisations are proud to have the coat of arms of Deal."  (

That article can be found at http://www.kentonline.co.uk/east_kent_mercury/news/2013/February/21/cricket_club_enters_crest_row.aspx

In a follow-up article in This Is Kent on February 27, the Deal Town Council has voted unanimously to opt for the cheaper (than the £10,000 they said it would have cost to change the arms) option of taking on the Cinque Ports arms, personalised with the town name and motto. 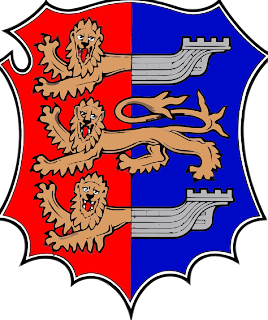 I am assuming that what they are actually doing is dropping the charged chief from the old arms of the Borough and adding the town name above and motto below the shield, and not taking the arms of Hastings (which are differenced from the Cinque Ports by having a whole lion passant guardant in place of the center lion/hulk dimidiation).  In other words, going back to what the Deal coat of arms was a little over a century ago, as you can see in this postcard from the very early 1900s. 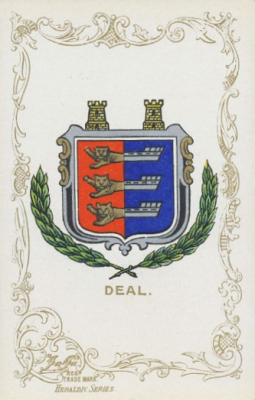 This article can be found on-line at http://www.thisiskent.co.uk/Deal-Town-Council-choose-Cinque-Ports-coat-arms/story-18266892-detail/story.html#axzz2N5UuDax0