We spent a lot of our time in Heidelberg in and around two churches: the Heiliggeistekirche (the Holy Spirit Church) and Der Peterskirche (Peter's Church).  Before getting to the heraldry we saw there, I thought I'd explain why we went to those two churches in particular.

My great-great grandparents both attended the Holy Spirit Church.  However, at that time, there was a wall filling the church separating into two parts.  The Catholics (of whom my great-great grandfather was one, as were his parents and their parents) and the Protestants (of whom my great-great grandmother was one, as were her parents and their parents) each met in one of the two parts of the divided building.  But somehow, these two met and married, but did not do so in the Holy Spirit Church.  Rather, my great-great grandfather converted to Protestantism, and in May of 1865 married my great-great grandmother in the Protestant Peter's Church, which was the church which still serves Heidelberg University.  A little later, on April 23, 1867, my great-grandfather was born and was baptized at Peter's Church.  As a consequence, both of these churches have family connections to me, and I was able to spend a fair bit of time in and around both of them. Fortunately for you, they also each had a fair bit of heraldry in them.

The following are a couple of the heraldic monuments mounted on the exterior of Peterskirche. 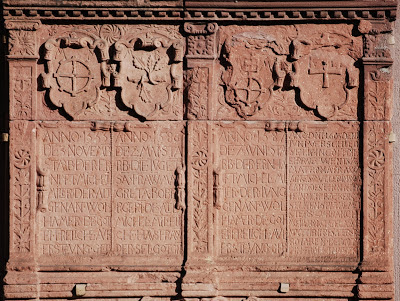 The monument above is to four people, a father and son with their respective wives.  From left to right we have (assuming I am reading the Latin and German correctly):

Magreta Bobe's arms have the trunk or branch of an oak tree fesswise (horizontally) and sprouting leaves, while Agnes Mullerin's arms have an equal-armed cross in chief (of which part of the uppermost arm is missing). 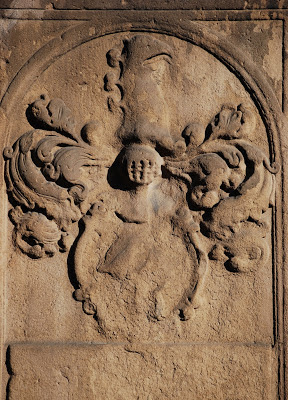 Some of the monuments have been better protected from the elements than others, as you can see from this very worn one here.  Indeed, of the inscription below the shield only a few letters on the upper left-hand part remain, and it is impossible to make out what the figures on the shield are anymore, but the crest of a griffin's head is quite distinctive!