Ecclesiastical Heraldry in the News! 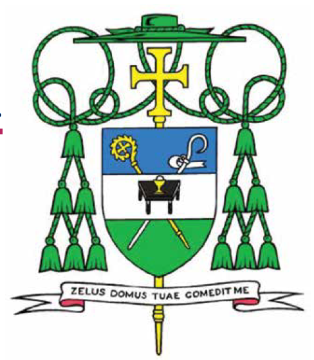 I’m glad that the article gives a blazon for the arms, as otherwise I would have mistaken the charges on the fess (the horizontal white stripe) for some kind of robot.  (Which lets you know how much science fiction I watch!)  Still, I found the blazon to be a bit confusing.  “Upon a field party per fess Azure and Vert two crosiers in saltair [sic], the one per bend a bishop's crosier Or and the one per bend sinister, a veiled abbot's crosier Argent; upon a table Sable a host and chalice Proper all upon a fess overall of the fourth.”

It’s been my experience that one blazons the charges on the field first, and only then the charges which lie on other charges.  In other words, “Per fess Azure and Vert two crosiers in saltire, the one bendwise a bishop's crosier Or and the one bendwise sinister a veiled abbot's crosier, overall on a fess Argent on a table Sable a host and chalice Proper.”

Further, I would note that not even the College of Arms in London is any longer blazoning tinctures with “of the first,” “of the second,” etc. as being confusing.  Witness the blazon in the second paragraph quoted from the article, where you have to hunt through three-quarters of the blazon to figure out which tincture is the “fourth” one cited.  It’s easier simply to repeat the tincture if necessary.  Which isn’t necessary anyway in my proposed blazon.

As a final quibble, the croziers are not “per bend” and “per bend sinister.”  The gold one is “bendwise,” “lying in the direction of the bend” according to J.P. Brooke-Little’s An Heraldic Alphabet, and by extension the white crozier is lying in the direction of a bend sinister.  “Per bend” is how it would be divided if it were of two different tinctures with the line of demarcation running down its length.  This is not the case, and even if it were, it would be a crozier “bendwise per bend A and B,” with A and B being different tinctures.

But what do I know?