In a March 14, 2013 article at Volume One, entitled "A Coat of Arms for Eau Claire?," Eau Claire, Wisconsin, City Councilman David Duax has been spearheading an effort to get the city to adopt a coat of arms.  Councilman Duax and Council President Kerry Kincaid have worked with Eau Claire graphic artist Rachel Schimelman to create a "coat of arms," which would also be used as part of the city's official seal. A draft version of the artwork, unveiled by Kincaid at Eau Claire's Own Birthday Bash at the Volume One Gallery on March 9, is shown below. 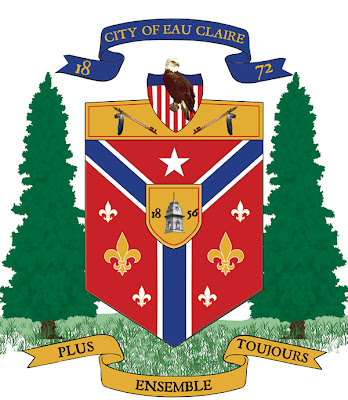 Apparently they opted to go with what I tend to term "kitchen sink" heraldry, containing as it does "everything but the kitchen sink."  The Volume One article suggested that to include all of the symbols of Eau Claire, you would choose: "The mighty Chippewa River and its more slender sibling, the Eau Claire River.... Trees to represent lumbering. Something to honor the region's indigenous inhabitants, ... and something French too. And don't forget our most famous avian historical figure, Old Abe the war eagle."  Not to mention "the tower of the original county courthouse," a star to symbolize Eau Claire's status as a county seat, and "fleurs-de-lis represent the entities (two villages and four townships) that were united to create the city in 1872."  And, of course, we mustn't overlook the inescutcheon and the "outescutcheon" (for lack of a better term), nor the two trees as supporters.  As I said, "kitchen sink" heraldry.

Ms. Schimelman "had never been asked to create a coat of arms before," something I have no trouble at all believing.  And she doesn't expect the City Council to seek many changes. "'I don't think council members see themselves as on-the-fly graphic artists,' she said with a laugh."  And if they actually don't ask for many changes, I can easily believe that, too.

I suppose I shouldn't complain too much; it does obey the rule of contrast (no color upon color, and no metal upon metal), after all, something that many heraldic designs by non-heralds fail to do.

But I think they could have done so much better.

Email ThisBlogThis!Share to TwitterShare to FacebookShare to Pinterest
Labels: Wisconsin