I had run across one of the articles linked to below, and then also had a regular reader send me another link to it.  So I knew it had to be something that you all needed to know about.

It seems that John Bercow, Speaker of the House of Commons in England has recently had an official portrait made, and – and this is where it relates to this blog – the frame incorporates his new coat of arms.

Now, that is not in and of itself all that newsworthy.  I mean, there are portraits of Speakers going all the way back to Sir Thomas More.  What makes it newsworthy in the eyes of the media is that the costs of the portrait and frame, which come out of the House budget, ran to some £37,000 (US$57,765).  And this at a time when HM Government is trying to pass austerity measures in response to the struggles of the British (well, and everybody else’s, too) economy. 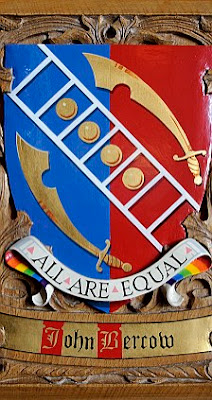 The coat of arms itself is a bit of what I tend to call "resumé" or “kitchen sink” heraldry, because they’ve thrown in all sorts of charges, including the proverbial kitchen sink.  I’ve heard it said that “a coat of arms should not be a resumé.”  Well, apparently the College of Arms and Speaker Bercow forgot, or ignored, that particular guideline.  On a field divided per pale, there’s a ladder (said to represent Speaker Bercow’s family’s humble origins), four roundels (because of his interest in tennis, and because of his roles as chairman of the Boundary Commissions of England, Scotland, Wales and Northern Ireland), two seaxes (several article scalls them “scimitars,” but they’re seaxes; you can tell by the semi-circular “notch” cut out of the back edge of the blade.  The Guardian corrected the reference to “scimitars” in their story) taken from the arms of the county of Essex, where the Speaker attended university.  The words on the motto scroll “All are equal” are interspersed with pink triangles (for his championing of LBGT rights), and the reverse side of the scroll is the rainbow flag of the gay rights movement.  As I said, “kitchen sink.”

You can find the stories, with pictures and various reactions to the portrait, the coat of arms, and especially to the costs, at the following: