When Is A Knight Not “Really” A Knight?

I was really tempted to do some kind of subject line with a punch line of “once a knight is enough,” but I manfully resisted the temptation. (The fact that I wasn’t able to come up with something on short notice that really worked well had nothing to do with it!)

Anyway, there was a story dated November 2, 2011, in the Greenwich, Connecticut Greenwich Time about Peter von Braun, who is running for election to the Board of Education there. There is, apparently, some controversy being stirred up by his opponents about the fact that he calls himself a knight.

What the controversy really boils down to is that Mr. von Braun has not been knighted per se, but is a Knight of Grace of the Order of St. John, a chivalric order headed by Queen Elizabeth II. So he can’t add “Sir” as a title to his name, but, yes, technically he is a knight. 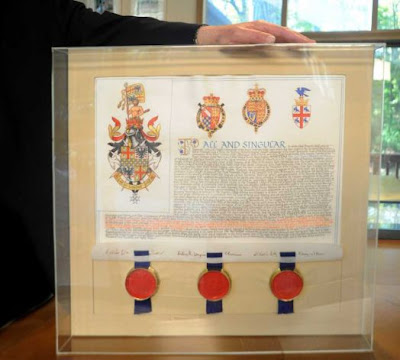 The part of the story that interested me was the pictures, showing von Braun with the grant of honorary arms he received from the College of Arms in 1983, along with a close up of the grant alone. Even when the arms are pretty complex (and these seem to be pretty complex, quarterly with a checky fess), it’s always of interest to see someone’s grant of arms.

If you’d like to read the full story of the controversy, including what David White, Somerset Herald of the College of Arms in London had to say to inquiries about von Braun's knighthood, it can be found on-line at: http://www.greenwichtime.com/news/article/He-s-no-Beatle-but-yes-von-Braun-is-a-knight-2249330.php
Posted by David B. Appleton at 6:00 AM

Email ThisBlogThis!Share to TwitterShare to FacebookShare to Pinterest
Labels: College of Arms, Connecticut