Once Again, You Can Find Heraldry Everywhere!

I’ve said it many, many times, and it continues to be proven true: You can find heraldry everywhere!

In this particular case, my wife and I had gone out for a lunch of her favorite food (that is, “food that’s been fixed by somebody else”), and right there in the parking lot was a van with the following coat of arms prominently placed about it in several places.

These are the arms, or at least the logo, of the Texas Tech University Student Housing.  I'd blazon them as Quarterly gules and argent, in bend an open book and a lamp of knowledge argent, and in bend sinister a mullet gyronny of ten sable and argent and a key erect wards to chief and to sinister sable.  (Sable, in spite of the fact that the key is at least 50% white.  But that's "metal on metal", and we all know that that would be very bad contrast and "just isn't done, don't you know.")  The shield is surmounted by an eagle displayed argent.

The arms appear to be a variant of those that appear on the website of Texas Tech, which use an entirely red shield with a white cross throughout charged with ten* acorns bendwise (acorns are "reversed" or inverted, what many of us would think is upside down, by default), and the same charges (open book, star, key, and lamp) in the four quarters. 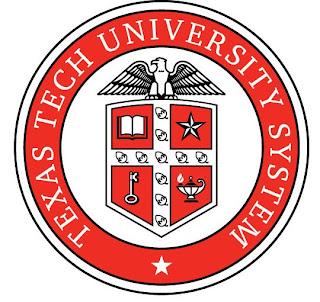 Now, Texas Tech is located in Lubbock, Texas, nearly 350 miles from the restaurant where we were eating. I have no idea what it was doing in little ol’ Cedar Hill (the next town over from where we live in Duncanville) at the time. But still, it’s just further proof that you don’t even have to be looking for it to run into heraldry. Just keep your eyes open and you’ll see it, even in a society that often seems to disparage the use of coats of arms as elitist or snobbish.

You can find heraldry everywhere!


*  I've heard the opinion that heralds cannot count that high; that for many heralds, the numbering system goes: one, two, three, four, five, six, semy (or many). This is not strictly true; I've seen blazons that specifically numbered up to sixteen. But, still, it's not a bad rule of thumb.
Posted by David B. Appleton at 6:00 AM