Oh, dear. It seems that the artist painting the new sign installed by the Epping Town Council had an error on it. The three seaxes, an early Anglo-Saxon type of sword, had the “notch” on the wrong side of the swords. (The red shield with the three seaxes is the arms of Essex.) 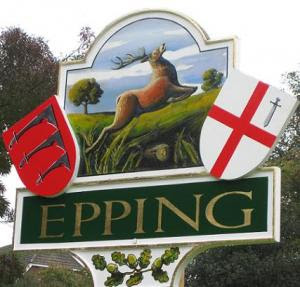 Someone noticed that the other shield on the sign, with the arms of the City of London, had the sword upside down and on the wrong side of the shield. (And I would note that it is the wrong color, too! It should be the same red as the cross.) The sword should properly be placed in the dexter chief quarter of the shield (the upper left as you look at it), and on the sign it is placed in the sinister chief quarter (the upper right).

(It is a pretty nice deer, though as one person noted, it's not the specific type of deer that one would normally find in the forests around Epping.)

One commenter to the story noted that “This is a poor advertisment for the painter if he can't get the sign right after more than 2 attempts.”

The full story can be found the website of The Guardian at: http://www.guardian-series.co.uk/news/efnews/9278845.EPPING__New_sign_painted_incorrectly/
Posted by David B. Appleton at 6:00 PM