There’s a post (dated November 4, 2011) over on The Shakespeare blog: In Shakespeare’s footsteps by Sylvia Morris entitled “The mysteries of emblems, mottoes, and Shakespeare’s own chair”. In it, she discusses Shakespeare’s coat of arms, and how it appears on a chair traditionally known as “Shakespeare’s courting chair,” which appears to have been made in the early 1600's and thus possibly contemporaneous with the Bard of Avon. 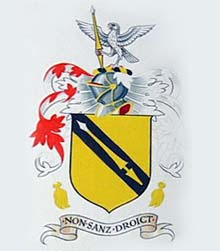 Whatever the case of the authenticity of the chair, she’s got an interesting and informative post, and even gives a little of the controversy in the College of Arms about the grant of arms to Shakespeare as well as some other aspects of how Shakespeare “ye player” may have used or been involved with heraldry. You can find it on-line at: http://theshakespeareblog.com/2011/11/the-mysteries-of-emblems-mottoes-and-shakespeares-own-chair/

She has an earlier post (November 2), “The facts about Shakespeare’s coat of arms,” that gives more of the history of the grant from the College of Arms that you might also find of interest. There’s a link to that post at the top of the page linked to above.
Posted by David B. Appleton at 6:00 AM

Email ThisBlogThis!Share to TwitterShare to FacebookShare to Pinterest
Labels: College of Arms, Shakespeare