I have no idea how I missed this; the announcement was made back in February of 2010, but I never saw anything about it. My wife (bless her heart, she sends me any heraldry she comes across as she cruises the web) sent a picture to me and asked if I knew. And I didn’t! Anyway ...

The United States Postal Service issued a set of four Navy heroes stamps last year. Each one has a bust of the person so honored, and includes a bit of heraldry for each one. 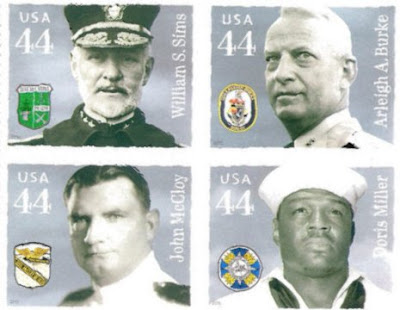 All of the images of the stamps that I’ve found are not that large, and the exact designs of the heraldry/insignia (which a placed down in one corner of each stamp) aren’t at all easy to make out, but they appear to be the coat of arms or insignia of a ship on which the particular individual served.

The honorees, in alphabetical order, are:

John McCloy, one of the few men in the history of the U.S. to earn two Medals of Honor - one for a rescue mission during the Boxer Rebellion in which he was wounded and the second during the 1914 Mexican Revolt for intentionally exposing his boat to draw enemy fire to identify their positions. In 1919, he was awarded the Navy Cross as commander of USS Curlew, which engaged in minesweeping in the North Sea after World War I.

Petty Officer Doris Miller (I've always heard his name pronounced as if the "s" were silent: Doree), cited as the first black American hero of World War II. At Pearl Harbor on December 7, 1941, he was a mess attendant on the battleship USS West Virginia. Miller helped rescue scores of shipmates wounded or trapped in wreckage, later helping move the ship's mortally wounded captain. Never trained in its operation, he manned an unattended 50-caliber machine gun to fire on Japanese aircraft until ordered to abandon the bridge as fires raged out of control. He was awarded the Navy Cross and was killed in action in 1943.

William S. Sims, commander of U.S. naval forces in Europe during World War I, who was an outspoken reformer and innovator who helped shape the Navy into a modern fighting force.

It’s nice to see such a public use of heraldry, even if it did happen early last year and I missed it then.
Posted by David B. Appleton at 6:00 AM