A recent story about a Sarasota, Florida man discusses his commission to design two embroidered coats of arms for chairs in the Peace Palace at The Hague. (The Peace Palace is home to the International Court of Justice and other international facilities in The Netherlands.)

Willem van Osnabrugge, who grew up in The Netherlands, was interviewed by Paradise Afshar of the Bradenton Herald about this commission. He has been creating embroidered coats of arms for his friends for some years. Eventually, he created a website to showcase his work, and Jacobine Wieringa of the Carnegie Foundation saw it and contacted him. The Carnegie Foundation is building a visitor center in front of The Peace Palace and they wanted embroidered coats of arms for two nations that have passed into history: Austria-Hungary and Yugoslavia. 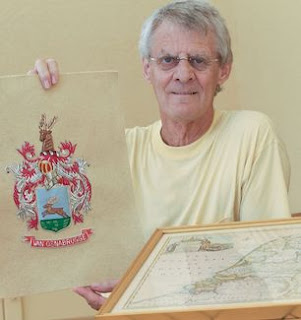 “It’s an honor,” he said. “It’s my little bit of contribution to world peace.”

Email ThisBlogThis!Share to TwitterShare to FacebookShare to Pinterest
Labels: Florida, The Netherlands