Returning back to Dallas, while sitting down for a quick bit of lunch between planes at the airport in Charlotte, North Carolina, I found one last bit of heraldry on this trip.

It was on the front of a Mexican restaurant called Tequileria. (Looking them up on-line, I find that, naturally enough given their name, they emphasize their “top shelf tequilas” and “impressive array of margaritas.”) I didn’t go in (I was eating at another establishment a short way away), but I did see this on the front wall of the store. 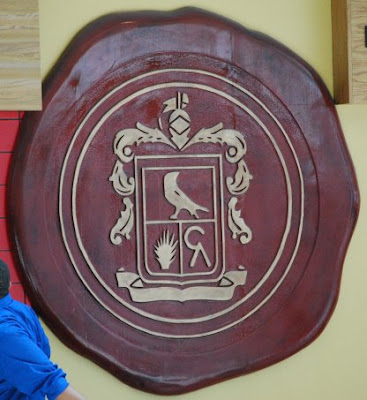 If I were to try to blazon this “armorial seal” (since as you can see they’ve tried to make it look like it’s been impressed into a wax seal), it would have to be something like: Per fess ... a bird close reguardant and per pale ... an agave plant (which is what they make tequila from) and ... well, I’m not quite sure what the thing in sinister base represents. It might be some sort of a maker’s mark, a C and A (without the crossbar) conjoined, or a C and an inverted V conjoined, or it might represent some sort of tool. Or I may be totally missing its signification here. The helm above the shield is that of a knight (facing front, visor up), with a crest of a swallow-tailed pennon on a pole. And it has a motto scroll below the shield, but no motto.  (You'd think that they could have used that space for something like "In tequila veritas" or something similar.)

What a great trip, confirming to me once again that “You can find heraldry (or at least things that are trying to look like heraldry) everywhere!”
Posted by David B. Appleton at 6:00 AM