Some Heraldry Found in Dallas, Part 4 of 4

So, to finish up our heraldic “finds” of that nice spring Saturday, we have: 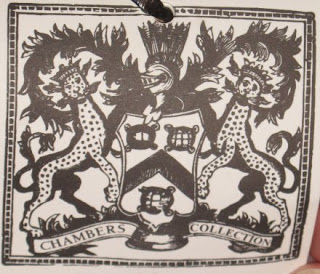 A tag for the “Chambers Collection,” where another antique dealer had placed some of his stuff in the shop we were looking in. He had marked all of his items with these tags. The arms are actually those of the Worshipful Compay of Dyers: Sable a chevron engrailed between three bags of madder argent corded or. Crest: A grain tree proper. Supporters (dexter and sinister): A panther proper incensed gules crowned or and semy of roundel gules, azure, vert, purpure and sable. It’s a great rendition though, harking back to the heraldic woodcuts of the 17th Century that I’ve seen.
And, finally, we ran across what has become a bit of an heraldic mystery. There was a very large, ornately-framed mirror with this coat of arms carved and painted at the top. 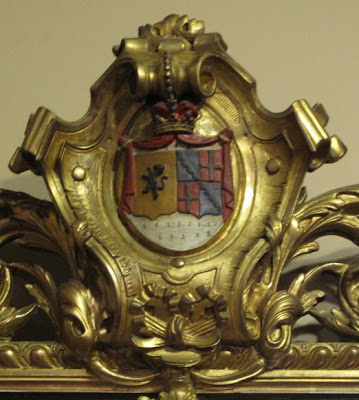 On a mantle (gules lined ermine) surmounted by a coronet (it looks most like the coronet of a Swedish count or a Norwegian baron, but I am told by some of my Scandinavian contacts that Swedish and Norwegian coronets do not use the red cap of maintenance showing here with their coronets, so I am now thinking that it might be that of a Belgian count) are two coats of arms. The shield to dexter (to the left as you look at it) could be the arms of Flanders, but there are a lot of entries in Renesse’s Dictionnaire, his ordinary to J.-B. Rietstap’s Armorial Général, for Or a lion rampant sable. So that doesn’t help very much in finding the identification of this coat.
The real trick comes in trying to decipher the shield to sinister (the right as you look at it). Not only is the combination of a black charge on a blue field and a black charge on a red field unlikely, it’s also difficult to determine if the underside of the bend is supposed to be embattled or invected or some other complex line of division.

I’ve already done a search in Luc Duerloo and Paul Janssens’ Wapenboek van de Belgische Adel and haven’t run across anything that seems similar (even assuming different tinctures for the quartered shield, say with white or gold instead of black for the bends and crosses). But I’ve got some more Flemish and Dutch armorials I can go through (in my “copious free time”) and see what I might find. It would be nice to be able to come up with at least a tentative identification of these arms, if only to satisfy my own curiosity.

Of course, there’s always the possibility that the person who painted the shields and charges was just using colors that he thought would look good. It’s not like we haven’t seen that as a problem before. As only one example, see my post of February 3, 2009 about the British Royal Arms on the Governor’s house at Williamsburg, Virginia (http://blog.appletonstudios.com/2009/02/youd-think-historians-would-do-better.html).
Posted by David B. Appleton at 6:00 AM