You'd Think That Somebody Would Have Remembered

The March 18, 2011 article is probably best summed up not so much by it's headline ("Letchworth’s £10,000 coat of arms is ready - but ‘it’s a mystery’ says council chairman") but rather by the synopsis that is it's first paragraph:

A town council has taken delivery of a coat of arms costing almost £10,000 which it says it has no use for.

The Letchworth Garden City Council was contacted by the College of Arms about a coat of arms, which they had ordered and paid a pretty penny for, that was ready but for which no one had made arrangements to collect.  This apparently came as a big surprise to the council members, since no one can find the paperwork authorizing the expenditure (£9,975, or about US$17,000).

It doesn't help that the council is expected to be abolished in the next four years. 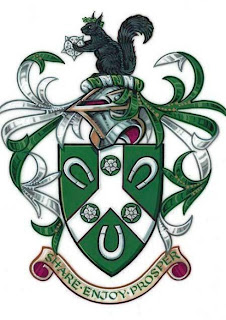 The arms are very pretty and all that, as you can see here, but what a tremendous waste of taxpayer money, in my opinion.  The full story can be found on-line at: http://www.thecomet.net/news/letchworth_s_10_000_coat_of_arms_is_ready_but_it_s_a_mystery_says_council_chairman_1_833694
Posted by David B. Appleton at 6:00 AM