University of Toronto Coat of Arms

There's a nice, albeit brief, article -- actually, one of the better articles about a specific coat of arms I have seen -- regarding the history and symbolism of the arms of the University of Toronto, which can be found in the on-line pages of The Varsity, the student newspaper for the University, at: http://thevarsity.ca/articles/45043 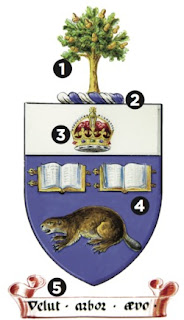 Reporter Dylan Robertson goes into the history of the coat, followed by a description of the various parts of the arms and then by some "Fun Facts", including a brief discussion of the "emasculation of the U of T beaver" over the years and a quote from the correspondence of one researcher who was researching academic heraldry in the 1970s that: "I just could not believe that [university President] Bishop Strachan would establish an institution without having a suitable insignia and particularly as it had been established by royal charter and named after the sovereign."  (The University of Toronto was originally King's College.)

It's an enjoyable article, and I think it's worth your dropping by to read it.
Posted by David B. Appleton at 6:00 AM