A Modern Take on Heraldry

There's an interesting article posted on Friday, May 6, over on Flavorwire: Cultural News and Critique, "Rashaad Newsome’s Hip Hop Heraldry", that gets into the background and inspirations for Newsome's performance Herald at the Festival of Ideas for the New City in New York.  The article takes "a look at some of his work that explores the connection between the system of heraldry, hip hop culture, and his work at large, to give you a primer for Herald."

I really liked some of the things he had to say about how he became interested in heraldry, and how heraldry and hip-hop (two words I never thought I'd hear in the same phrase!) can work together.

“I was really drawn to Armorial achievements,” he says, referring to the name for a coat of arms. “And how they’re integrated into the architecture of Europe… I was fascinated in the visual hierarchy that they impose on the viewer. Like when you see a coat of arms you know it’s associated with pedigree.” 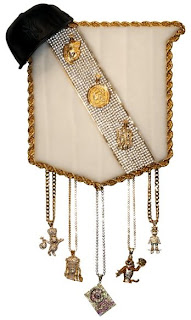 Newsome recreates European coats of arms from the 16th and 18th centuries using contemporary material. “I figured out that heraldry is how the coats of arms are created. It’s a system of symbols that represents social status, economic status, status as a warrior, pedigree, a way of assembling these images that represent all these different things to create a meta status symbol.”

“I felt like there was a lot of links between that and modern times. The way people do that with their bodies. I feel like people ornament their bodies in the same way. So there’s a lot of connections between popular culture specifically black youth culture, i.e. hip hop, which is a major reference point for me."

Anyway, I found it to be an interesting new take on this ancient art, and thought I would pass it along for those of you who might be interested to see how at least one modern artist is adapting heraldry to his own uses.  The full article can be found on-line at: http://flavorwire.com/176992/rashaad-newsomes-hip-hop-heraldry
Posted by David B. Appleton at 2:30 PM