You’d think historians would do better

My wife is always watching out for me (in so many ways), for which I very often have to thank her. Recently, she sent me a photograph (shown here) that she found of part of the Governor’s Mansion at Colonial Williamsburg, Virginia. Central in the photograph is the Royal (British) arms, beautifully carved and placed prominently above the entrance. Beautifully carved, prominently placed, but poorly painted. 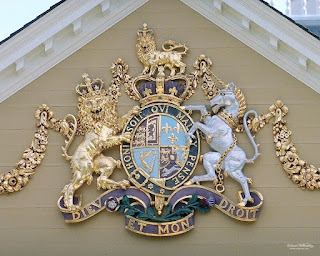 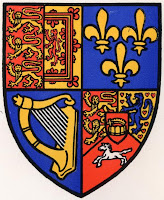 Admittedly, they got part of it right. All of the parts which should be gold are, in fact, gold. But everything that should be red is dark blue, even the velvet cap in the Royal crown and the tongues of the two lions (crest and supporter). Everything that should be dark blue is painted a light blue. (The sole exception being the Garter, which is the dark blue that it is supposed to be.) And the white is painted a bluish-gray. (See the drawing of the Hanoverian Royal arms to the right for what the colors are supposed to be.)

I have no idea why these arms were painted this way. Did they run out of red paint? Then why not substitute the light blue for the red, since they obviously had sufficient quantities of dark blue. It still wouldn’t have been right, but it would have been more correct than the current version. Did someone just not care? Did no one double-check to confirm the colors before sending someone out to paint the arms?

For a place which prides itself on being "History in Motion" as "the world’s largest living history museum" containing "hundreds of restored, reconstructed, and historically furnished buildings" (all according to their website http://www.colonialwilliamsburg.com/), I, frankly, expect better than what I see here. I mean, if they can’t get the coat of arms right, what else may they be getting wrong? It’s not like it’s hard to find the correct colors. There are any number of books and websites that give photographs and drawings in full color of the evolution of the arms of England and Great Britain through the centuries. (See, e.g., http://www.fleurdelis.com/royal.htm) So what happened here?

As I said, you’d think historians would do better.
Posted by David B. Appleton at 8:24 AM