Some Heraldry Found in Dallas, Part 3 of 4

Another one of the “not real” heraldry we saw at the antique store that Saturday was a piece of silver with a “crest” engraved upon it. The reflections were pretty strong, and it may be a little more difficult to make out what this is, but it’s a lion’s head erased contourny (turned to sinister), with a scroll beneath it with the motto: E pluribus unum. 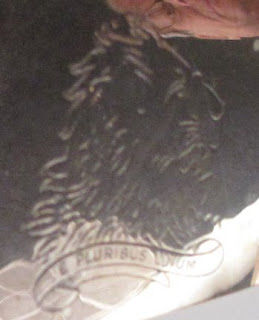 What makes me think this “crest” is less than authentic? Two things. First, the lion’s head is facing sinister; except for a few creatures that are facing the viewer, I’ve only seen crests with them facing dexter. Second, the motto is that of the United States of America, “out of many, one.”
Still, it was a neat thing to run across.
Not quite real, but moreso than the lion’s head crest, was a cabinet with an inlay version of the arms of the United States (Paly of thirteen argent and gules, a chief azure) on the breast of a bald eagle. 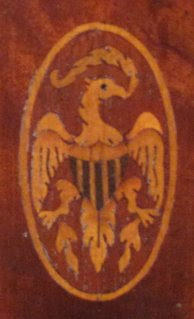 There’s only nine stripes on the shield instead of thirteen, and the eagle is facing sinister instead of dexter, but it’s a beautiful piece of inlay work nonetheless, don’t you think?
Posted by David B. Appleton at 6:00 AM