So there we were, making our way across the airport parking lot after having dropped off our rental car, intent only on getting into the terminal, checking our bags, and getting to our gate on time for our flight home. And what, do you think do we see while we are on our way? That’s right. Another coat of arms! 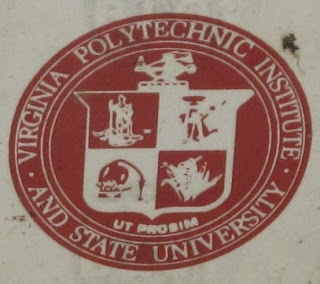 This time it was the arms of the Virginia Polytechnic Institute and State University, bold as brass (well, okay, aluminum) on the license plate of an auto in the parking lot at the airport. (According to VPI’s website, this is their “traditional seal.” Their “logo” consists of a shield and the words “Virginia Tech” in a specific typeface.) The shield on the seal is, like so many American arms designed by committee,* quartered, but each quarter is of the same tincture. The charges on the shield, all in white, are, as best I can make them out: First: the central figure from the seal of the State of Virginia, Virtus, the Roman goddess of virtue, standing over a defeated opponent (or as I usually think of it, standing atop some dead guy); Second: a scroll bendwise surmounted by a staff bendwise sinister being held by a (disembodied) sinister hand aversant couped in chief, overall a tripod ensigned with what appears to be a footed flat bowl; Third: a retort atop a square brazier containing a fire, distilling to sinister into a tall glass of some kind; and Fourth: An ear of corn (maize), shucked open. The crest above the shield is: A lamp of knowledge with a dexter hand (also disembodied) couped reaching for the lamp lid’s finial. Below the shield is their motto: Ut prosim (That I may be of use). All within, of course, the circular legend that gives the institution’s full name,
Posted by David B. Appleton at 6:00 AM