Flags in the News!

It's a terrible thing, when you find out something about the place you live that just makes you embarrassed.  Here I am, living in "The Great State of Texas" (and yes, that is a single phrase down here, and sometimes treated like it's a single word, something akin to the single word "damnyankee," of which I am one), and it seems that some public officials have made an error.  That in itself wouldn't be all that bad, perhaps, but it's an error that has continued over a number of years.  Hence my embarrassment.

It seems that ballots for absentee voters in Atacosa County, Texas, have a depiction of the state flag of Texas on them. 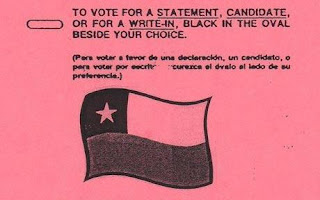 Except that they don't.  What they have is a depiction of the national flag of Chile.  Here's the Texas flag. 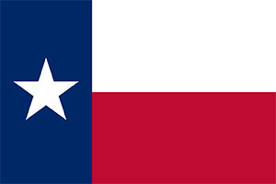 Now, admittedly, the two flags are very similar.  In heraldic terms, I suppose it would be the difference between a canton charged with a white star and a dexter tierce charged with a white star.  But still, I generally expect better from the public officials here, especially since you can't drive anywhere in the state without seeing the state flag flying here, there, and everywhere.

So, as I said, it makes me embarrassed.