This next bit of heraldry is not technically “in” Hollywood Cemetery in Richmond. It was in the rear windshield of a car which was in the parking lot there. 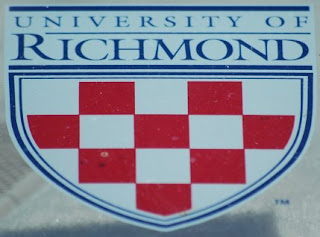 The arms are those of the University of Richmond, Checky argent and gules. Officially, the University’s logo, as they call the shield, also contains “On a chief argent, the words ‘University of’ and ‘Richmond’ azure.”

The University is located six miles from downtown Richmond. It is a liberal arts university which was founded in 1830. Its website, on which its arms appear to have been used sparingly, usually just one small image on each webpage (except in its Trademarks and Logos Style Guide), can be found at http://www.richmond.edu/