Another heraldic "mystery" has appeared similar in some ways to the one I noted in two posts on July 8 (regarding the code in the new logo/coat of arms of the United States Cyber Command).  This time, however, the "code" isn't one, and there's no hidden meaning behind the string of binary code (ones and zeros) on the arms of Canada's new Governor General.  At least so says both Rideau Hall (the Governor General's office) and the Canadian Heraldic Authority (which designed the arms), though that hasn't stopped folks from speculating that there is a hidden meaning here. 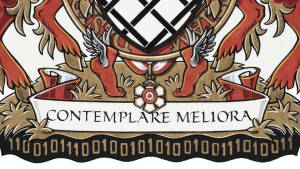 Still and all, it's kind of nice to have something like this stir up the internet a bit and get people looking at and talking about heraldry.

You can find the story on the website of The Globe and Mail at http://www.theglobeandmail.com/news/politics/ottawa-notebook/dont-bother-trying-to-crack-the-governor-generals-code/article1745085/
Posted by David B. Appleton at 5:13 PM