A Great Place for Heraldry, Part 1

During our short stay in Chicago earlier this year, as our long-suffering hosts were ferrying us all about the city, we passed a really great spot for heraldry. So great, in fact, that it’s probably going to take three posts just to cover what I was able to photograph on the exterior as we passed it. 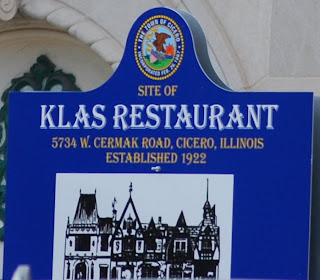 The building is that of the Klas Restaurant, located at 5734 W. Cermak Road in the Chicago suburb of Cicero, Illinois. The restaurant was founded nearly 90 years ago, features Bohemian cuisine, and has played host to such notables as Alfonso “Scarface Al” Capone. You can see the restaurant’s menu and learn more about it from their website at: http://klasrestaurant.com/
But the most notable feature to me was not only the number of coats of arms scattered across the façade of the building, but the variety of media used for them. 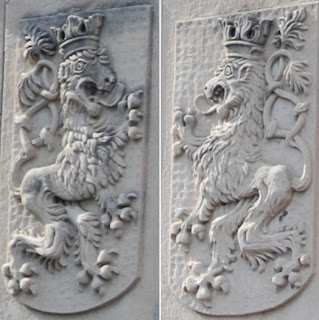 Most prominent, and appearing in some very high relief carvings on either end of a row of windows, are the arms of what was then Czechoslovakia.* The depiction of the lion in each of the shields has a vitality that is fairly rare but which is a pleasure to see.
* These are not the current arms of the Czech Republic (for which see below), but rather the old Gules a lion rampant queue-forchy argent crowned or.