Our final bit of heraldry at Jamestown, Virginia, is at the markers at the site of the original Virginia Statehouse. As the marker there notes, this was the site of the first purpose-built statehouse, and recognizing the influence in America of the laws and legal institutions of England. “American representative government is the legacy that had its start in England. The people of early Jamestown brought not only cargo and supplies, but ideals of the rule of law, which were successfully planted in this new place.” 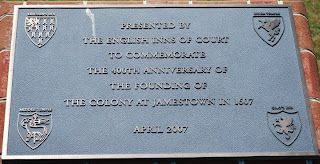 A memorial plaque next to the descriptive marker was presented by, and has the coats of arms of, the English Inns of Court and commemorates the 400th anniversary of the founding of the colony at Jamestown in 1607.