The Hunt Shrine at Jamestown

Continuing our survey of the heraldry in Historic Jamestowne, the site of the original colony in Virginia, we come to a large memorial plaque placed in a brick enclosure. The plaque itself, showing a scene of a priest administering communion to an outdoor congregation of worshippers, was erected, as it says, “To the glory of God and in memory of Robert Hunt, Presbyter.” 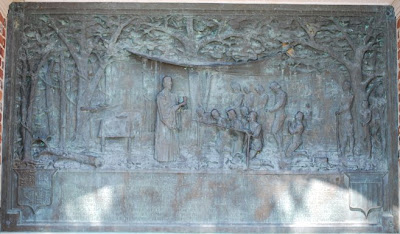 Robert Hunt was the chaplain of the expedition in 1607 which founded Jamestown. He took a leading role as a peacemaker in the settlement, often mediating disputes between various factions and smoothing “ruffled feathers”. He was described by Captain Edward Wingfield (whose arms we have already discussed here) as “a man not in any way to be touched with the rebellious humours of a popish spirit, nor blemished with the least suspicion of a factious schismatic, whereof I had a special care”. Mr. Hunt died in 1608, during the first year of the settlement (as did many of his fellow adventurers).
There are two coats of arms on the Hunt Shrine. The one on the lower left of the panel is of the Royal Arms of Great Britain; the one on the lower right is the arms of the United States. The latter is hatched to show the colors. 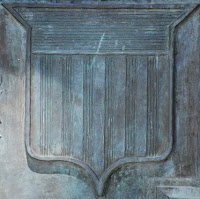 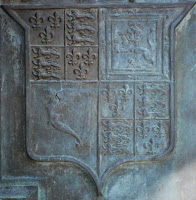