He is especially remembered for his role in helping to establish Jamestown. He was a leader of the Virginia Colony between September 1608 and August 1609, and led an exploration along the rivers of Virginia and the Chesapeake Bay. He explored the coasts of New England in 1614, and died in England in 1631 at the age of 51. 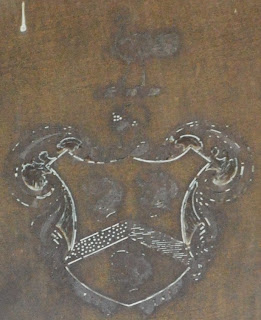 His arms can be found on a plaque inside the church, though they are not particularly easy to make out. 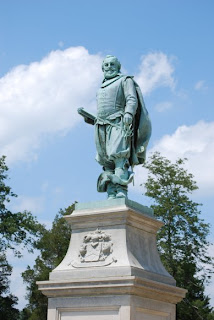 Outside and little way from the church is a monument to Captain John Smith, bearing full-length likeness of him, and bearing his coat of arms as well. 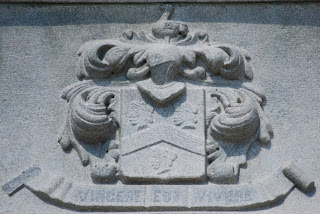 It is difficult to determine the tinctures of his coat of arms. The colored versions I have seen to date has different tinctures for the field and the chevron. The bookplates I have seen were neither tricked nor hatched. I don’t really feel like crawling through the nearly eight pages of Smith arms in Burke’s General Armory.* Papworth gives Vert, a chevron gules between three Turk’s heads couped proper turbaned or for “Smith; granted 1623”, which sounds like it could be our man. On the other hand, the story is that he defeated, killed and beheaded Turkish commanders in three duels in 1601 or 1602, for which he was knighted by the Transylvanian Prince Sigismund Báthory and given coat of arms from him showing three Turk’s heads.** The arms on the Jamestown plaque and monument are partially hatched, but I do not know on what authority. Based on the Jamestown plaque, his arms have a chevron per pale or and azure between the three Turk’s heads. So it’s all a bit of a muddle. If English arms, the chevron violates the rule of contrast; if Transylvanian, the chevron seems out of place. A green field is very rare in both countries. And I have no idea where the chevron divided per pale comes from. So, what were John Smith’s arms? The best I can say at this point is that they contain a chevron between three Turk’s heads, tinctures unconfirmed.

The crest is: An ostrich holding in its beak a horseshoe. Motto: Vincere est vivere (to conquer is to live, if I’m reading it correctly; it doesn’t appear in my copy of Fairbairn’s Crests).


* The sheer number of coats of arms borne by various Smith’s listed in Burke gives the lie to the all of those bucket shops who will happily sell you _the_ “Smith coat of arms”.

** Of course, there are a lot of stories that purport to tell the origin of various coats of arms. Unfortunately, most of them do not hold up under scrutiny.
Posted by David B. Appleton at 6:00 AM