The next coat of arms in the church at Jamestown is a memorial plaque dedicated to the memory of Major General Daniel Gookin (1612-1687). The plaque was placed at Jamestown by the Massachusetts Society of the Colonial Dames of America. 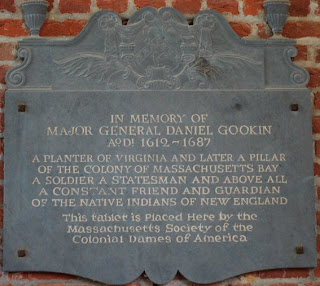 General Gookin was a planter in Virginia before heading north to the Massachusetts Bay Colony. In Virginia he and his small family took up residence at the Nansemond plantation. He was made a Burgess and represented Upper Norfolk County in the Grand Assembly which met in Jamestown on 12 January 1641/2.

In the summer of 1643 he emigrated to Maryland, and acquired land near the South and Severn Rivers, near Annapolis. Gookin sailed for Boston in May 1644 with his family, and in 1648 moved to Cambridge. Beginning in1652 he was elected an Assistant, one of the Council of eighteen magistrates to whom, with the Governor and a Deputy Governor, the government of the colony was entrusted, and was re-elected to this position almost continuously for a period of thirty-five years. He served Cambridge as Selectman from 1660 to 1672, and was appointed the first Superintendent of the Praying Indians (Native American converts). In this capacity he traveled to Indian settlements, often accompanied by his friend Rev. John Eliot, Sr, the “Apostle to the Indians”. Gookin wrote two books on the Native Americans: Historical Collections of the Indians in New England (completed in 1674, published by the Massachusetts Historical Society, 1792), and The Doings and Sufferings of the Christian Indians (completed in 1677, published in 1836). He wrote also a History of New England, but only fragments have survived. 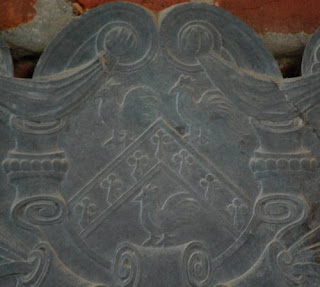 The blazon for this coat of arms is somewhat muddied. Crozier’s General Armory gives the arms of Daniel Gookin (1621, Virginia) as: Gules a chevron ermine between three crosses or, whereas the charges on the plaque are clearly not crosses, but roosters/cocks. Papworth’s Ordinary of British Armorials notes the arms of Cockeine/Gockyn/Goken/Gokin or Gookin as Gules a chevron ermine between three cocks or, which makes sense as canting arms (where one or more charges on the shield are a pun on the owner’s name). Burke’s General Armory has the arms of Gokin or Gookeine (of Ickham, county Kent, from which county Daniel Gookin here is believed to have originated): Gules a chevron ermine between three cocks or. On this basis, I am guessing that the blazon of “crosses” in Crozier is in error.
Posted by David B. Appleton at 6:00 AM