The subject of the next plaque in the little church at Jamestown, Virginia (and the only plaque done entirely in Latin), is to memorialize George Sandys (1577-1644), English traveler, colonist and poet, the seventh son of Edwin Sandys, Archbishop of York, and the great-uncle of English poet Richard Lovelace (Lovelace being probably most famous for his poem, To Althea, From Prison: "Stone walls do not a prison make, Nor iron bars a cage...."). 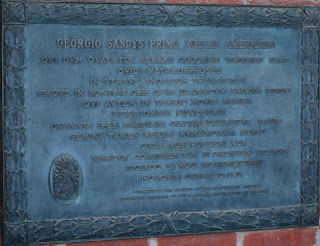 George Sandys began travelling began in 1610, visiting France, north Italy and Venice, Constantinople (well, okay, even then “It’s Istanbul, not Constantinople”), and then on to Egypt, Sinai, Palestine, Cyprus, Sicily, Naples and Rome. He published a narrative of his travels in 1615. He also took an interest in the English colonization in America. In April 1621 he became colonial treasurer of the Virginia Company and sailed to Virginia with his niece's husband, Sir Francis Wyat, the new governor.

In 1621 he published an English translation of part of Ovid's Metamorphoses; completing that work in 1626. He also began a version of Virgil's Aeneid, but never produced more than the first book. In 1636 he published his Paraphrase upon the Psalms and Hymns dispersed throughout the Old and New Testaments; and translated Christ's Passion from the Latin of Grotius; and in 1641 he brought out his last work, a Paraphrase of the Song of Songs.

He died unmarried at Boxley, in Kent, England in 1644. 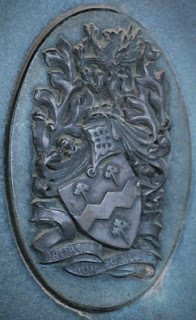 The arms here, borne without difference by many of the descendants of Edwin Sandys, Archbishop of York, are blazoned in Burke’s General Armory as: Or a fess dancetty between three crosses crosslet fitchy gules. The crest is given as: A griffin sergeant per fess or and gules. (The griffin can be a bit tricky to make out amongst the mantling in the depiction on the plaque, but it is clearly a griffin.)
Posted by David B. Appleton at 6:00 AM