It seems there's a mystery out there, heraldically related, for any code crackers who want to "take a crack" at it.  (Sorry about the pun!  Well, no, I'm not really.) 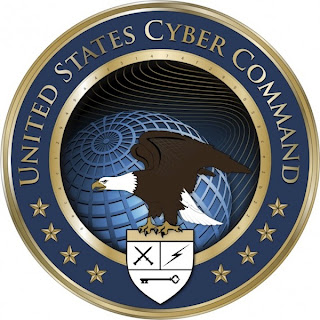 The logo of the newly-formed U.S. Cyber Command, which has a coat of arms of sorts on it, also has a code in its inner gold ring.  Wired's Danger Room blog has announced a contest and will give a free tee shirt to the first reader to crack the code.

At this point, though, apparently not even the folks at the U.S. Cyber Command know what the code means.  They only know that it is said to contain the mission statement of the Command, or maybe just a part of it.  The whole mission statement is: "USCYBERCOM plans, coordinates, integrates, synchronizes, and conducts activities to: direct the operations and defense of specified Department of Defense information networks and; prepare to, and when directed, conduct full-spectrum military cyberspace operations in order to enable actions in all domains, ensure US/Allied freedom of action in cyberspace and deny the same to our adversaries."  Which is a lot more characters than contained in the 32-character code.

The story as published on July 7 can be found at: http://news.yahoo.com/s/yblog_upshot/20100707/od_yblog_upshot/the-secret-code-in-u-s-cyber-commands-logo

The other mystery (besides the code) is the design of the coat of arms contained in the logo, which I would blazon as: Per fess, the chief portion also per pale, argent, argent and argent, a pair of swords crossed in saltire, a lightning flash bendwise sinister, and a key fesswise wards to base, all sable, a chief or.  It's a a bit messy, uses an unusual field division, is overly complex, and has metal on metal (the gold chief on the silver field).  And it's contained within the larger logo.  I suppose I should just be grateful that they're using some sort of heraldry, but I have to think that it could have been done better.
Posted by David B. Appleton at 8:40 AM