The next coat of arms on display in the church at Jamestown is one that I’ve seen before, in my research on the Gore roll of arms in Boston: Savage. But while this memorial is to “Thomas Savage, Gentleman and Ensign, The first white settler on the eastern shore of Virginia,” the individual in the Gore roll was another Thomas Savage,“Thomas Savage, Esq., of Boston, Col. of the First Regiment of Foot, co. of Suffolk”, who died in 1620. There is yet another Major Thomas Savage who died in Boston in 1682 and is buried in King’s Chapel Burying Ground, whose tomb is marked with another rendition of the same coat of arms and crest.  So it appears that the Savage family got around quite a bit in colonial times. 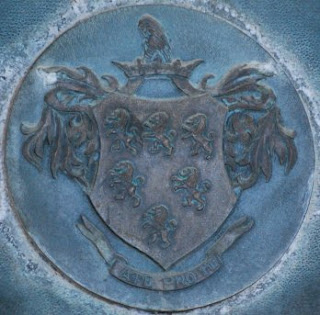 The memorial plaque was “Erected by some of his descendants 1931”. A quick search on the internet found that it was presented on Jamestown Day, May 13, 1931, by Dr. Henry Littleton Savage of Princeton University, and unveiled by Master Thomas Savage and Miss Nancy Savage of Northampton County, Virginia.

The blazon of the arms is: Argent, six lioncels rampant sable. The crest is: Issuant from a ducal coronet or a lion’s jambe sable. The motto is: A te pro te (from thee, for thee, according to Fairbairn's Crests).  (The northern branch of the Savage family uses for its motto: Fortis atque fidelis; brave and faithful.)
Posted by David B. Appleton at 6:00 AM