Heraldry in Dallas, Texas: the good, the bad, and the ugly

(Sorry, I just couldn’t resist using that subtitle!)
In any case, the coat of arms (well, to be truthful, there are two of them, one on either side of the main entrance, but they are both identical) on the old Thomas Building at 1314 Wood Street in downtown Dallas probably should rank among the "good". It consists of the very simple arms, "[Field] three fleurs-de-lis". Carved in stone but without any hatching, the tinctures are unknown. The arms are, presumably, France modern, Azure, three fleurs-de-lis Or, but why the arms of France should be on a building constructed in downtown Dallas sometime between 1910 and 1924 is, alas, a mystery apparently lost in the mists of time. I’ve been able to find very little information about the history of this eight-story building, and nothing at all about the arms on its facade. 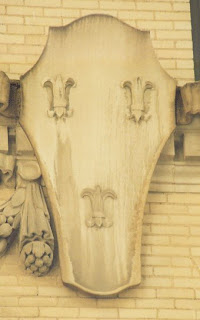 Now, to be fair, there is the historical fact of there having been "six flags over Texas": France, Spain, Mexico, the Republic of Texas, the Confederate States of America, and the United States of America (not necessarily in that order). So it is at least a possibility that the French arms are on the building to acknowledge one-time French sovereignty over the area. (One day soon we will discuss another Dallas building with a coat of arms that clearly relates to Spanish rule.) But unless and until I can find some bit of information that can give me something more than conjecture, I’m afraid that I’m left sort of scratching my head over the presence of French arms on this building in the heart of downtown Dallas, Texas.
But it is pretty, isn’t it? (Or as they might say down here, "Purty, ain’t it?")
Posted by David B. Appleton at 11:29 AM