The “Arms” of Mark Twain

While doing some of the research for the previous entry on the "arms" that Tom Sawyer was devising for Jim (because it always helps to double-check your facts), I ran across this amazing devisal of a "coat of arms" for Samuel L. Clemens, better known as Mark Twain, done by Tiffany & Co. 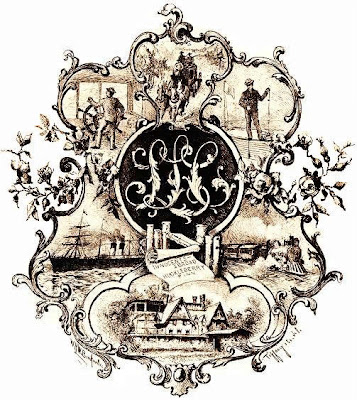 I’m really at a bit of a loss as to what I might say about it. I mean, about the only thing it has in common with real heraldry is that it’s placed on sort of a very Baroque shield shape. Other than that, it’s got six "quarters" with scenes relating to the great man’s life (including his house in Hartford), with a roundel in the center "charged" with his initials in a very foliated script. It is, in fact, just the sort of thing that I would expect from both the Victorian era and Tiffany & Company: florid, busy, overly fussy, and professionally executed by an expert craftsman. It is not, however, anything like what I think heraldry is supposed to look like.

But here, too, what an amazing piece of American "heraldry."
Posted by David B. Appleton at 8:31 AM