In Chapter 38 of Mark Twain’s Huckleberry Finn, in the process of helping the runaway slave Jim, Huck’s friend Tom Sawyer is trying to convince Jim and his friend Huck that Jim’s just got to have a coat of arms to go with the inscription he would carve on the wall of his "dungeon," like Lady Jane Grey or Gilford Dudley:
"Tom set to work to think out the coat of arms. By and by he said he'd struck so many good ones he didn't hardly know which to take, but there was one which he reckoned he'd decide on. He says: ‘On the scutheon we'll have a bend OR in the dexter base, a saltire MURREY in the fess, with a dog, couchant, for common charge, and under his foot a chain embattled, for slavery, with a chevron VERT in a chief engrailed, and three invected lines on a field AZURE, with the nombril points rampant on a dancette indented; crest, a runaway [racial slur deleted], SABLE with his bundle over his shoulder on a bar sinister; and a couple of gules for supporters, which is you and me; motto, MAGGIORE FRETTA, MINORE ATTO. Got it out of a book--means the more haste the less speed.’
‘Geewhillikins,’ I says, ‘but what does the rest of it mean?’
‘We ain’t got no time to bother over that,’ he says; ‘we got to dig in like all git-out.’
‘Well, anyway,’ I says, ‘what’s SOME of it? What’s a fess?’
‘A fess - a fess is - YOU don’t need to know what a fess is. I’ll show him how to make it when he gets to it.’
‘Shucks, Tom,’ I says, ‘I think you might tell a person. What’s a bar sinister?’
‘Oh, I don’t know. But he’s got to have it. All the nobility does.’"
Has the blazon confused you yet? Yeah, me, too. Fortunately, there’s a drawing that was done that may – well, probably not – help you sort it all out. Proof once again, as if we needed it, that a little learning can be a dangerous, or at least confusing, thing. But what an amazing piece of American "heraldry." 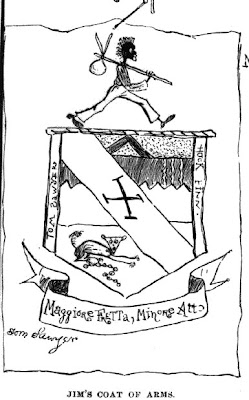