The following paragraph is taken from the description of a doodle made by then-President Dwight D. Eisenhower during what I can only assume was another boring meeting (as I suspect most such meetings are). From the discussion below, Ike apparently doodled at lot at such meetings. This one just happens to have ended up with a shield of sorts.
A pencil sketch by President Dwight Eisenhower on official "The White House" letterhead. The paper contains the typed agenda for "CONGRESSIONAL LEADERS MEETING [held on] Tuesday, August 20, 1957--8:30 am". The agenda includes "1. Lead and Zinc Legislation [by] the Under Secretary of the Interior 2. Veterans Housing [by] Dr. Saulnier... 6. House Report [by] Congressman Martin." Eisenhower sketched over this program in pencil. He drew a large nuclear insignia with an arrow diagonally piercing it in the center of the paper. ... According to California Congressman Jack A. Anderson, who was Eisenhower's Assistant Secretary of Agriculture and Special Administrative Assistant, the President would often "doodle"while in meetings. Sometimes he used the agenda, sometimes notepads, sometime loose pieces of paper. After Eisenhower would complete a sketch, he would slip it underneath the blotter at his place at the Cabinet table. For a while, Anderson collected these sketches, but soon Eisenhower began to take the sketches with him when he left the meetings and either throw them away or destroy them. 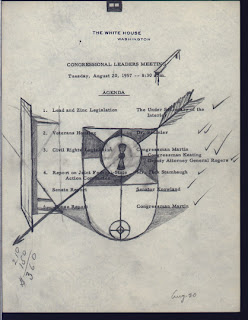 You can actually purchase this fine piece of historical American "heraldry" for only US$1,300.00. See the Antiquarian Booksellers’ Association of America website at http://search.abaa.org/dbp2/book339299442.html for this item. (I’d buy it myself, but for some reason I don’t seem to have a spare $1,300 laying about the house just now. And then, too, if I had that much money lying around, I’d have already spent it at Heraldry Today.* But I don’t, and I haven’t. Sigh.)

* To see why I would have already spent it at Heraldry Today, check out some of the books they have in stock now at their website. The link is on the left under "Websites of Heraldic Interest". But beware! Heraldry Today can be dangerous to your budget. Trust me about this; I know from experience.
Posted by David B. Appleton at 9:22 AM

Email ThisBlogThis!Share to TwitterShare to FacebookShare to Pinterest
Labels: Eisenhower