No heraldry in my family, until ...

As I’ve had the opportunity to learn about heraldry, work on my own genealogy, and make presentations introducing heraldry to other genealogists, I’ve had the fun of remarking about how I thought that it was very inconsiderate of all of my ancestors, that they never took into account their descendant’s hobby and used a coat of arms themselves. It was a fun statement because it allowed me to be a little bit self-deprecating, and it also, I believe, helped those in my audiences to relax a little bit and enjoy the presentations more.
Except that now I’ve discovered that not all of my ancestors were so inconsiderate, and that the statement I’ve been making that none of them had used a coat of arms is an untruth. (In other words, "I’ve been living a lie!") We took the opportunity last summer to spend a week in and around Boston, Massachusetts, eating seafood, seeing the sights, walking most of the Freedom Trail, seeing the Gore roll of arms (an 18th Century American roll of arms, about which I’ve written a book),* and visiting the gravesites of family members. 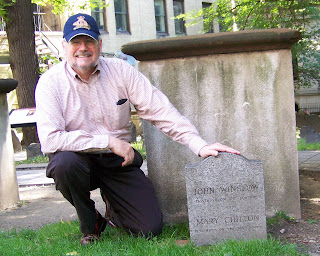 It was while visiting the table tomb of my 10th great-grandparents, John Winslow and his wife Mary Chilton Winslow, in King’s Chapel Burying Ground on the Freedom Trail in Boston that I discovered my previous error about the use of arms in my family tree. Because r 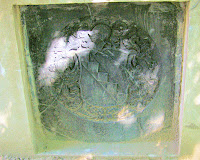 ight there on the side of the tomb was a cast plaque of the Winslow arms! (Blazon in Crozier's General Armory: Argent, on a bend gules, seven lozenges conjoined or.) Now, to be clear, I do not know for certain that John Winslow actually used these arms. I fully suspect that the plaque was added many years after his death. But it is certain that John’s older brother, Edward Winslow, sometime Governor of the then-colony, did use the arms. And if Edward Winslow had the right to a coat of arms, even under the most rigorous interpretation of the British law of arms so did his younger brother John. (Strictly speaking, John’s arms would have had to have been slightly different than Edward’s, though this is a rule honored far more often in the breach than adhered to, even in modern English heraldry.)
So, on the one hand, this is very cool! I have finally found people in my family lineage who used a coat of arms. On the other hand, though, it means I’m going to have to come up with another line for my presentations.
* If you are at all interested, more information about The Gore Roll book can be found at www.appletonstudios.com/BooksandGames.htm
Posted by David B. Appleton at 10:49 AM