Oops! Those Are the Wrong Arms


So, I was recently watching the BBC series Upstart Crow aired by my local PBS station -- and finding myself annoyed that while the series is available on DVD, it is not available here in the United States in a format that will play on my DVD player. Sure, I could order the set from England, but it would be in PAL format, which does not play on my North American NTSC player. And I haven't found anyone here in the States who sells it for Region 1 players. And I'd love to have it to add to my growing Shakespeare collection, and would pay good money to be able to do so. Grump, grump, grump. But I digress.
Anyway, the series is a humorous take on the life of William Shakespeare with a surfeit of references to his plays, etc., etc., etc.
And so there I was, watching Season 2, Episode 7, entitled "A Christmas Crow" guest starring Emma Thompson as Queen Elizabeth I. At a couple of places in that episode, Shakespeare's nemesis Robert Greene (played by Mark Heap), Master of Revels, is conversing with the Queen.
But I happened to notice (and photograph) the coat of arms on the wall behind the Queen. (You may click on the image below to go to a larger version if you like.) 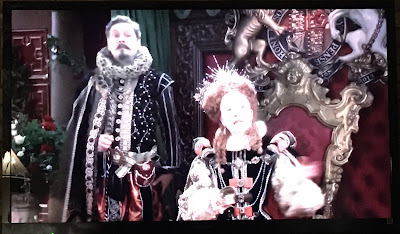 The arms behind "Queen Elizabeth I" are quite clearly the Royal Arms of Great Britain in use since the accession of Queen Victoria in 1837, Quarterly: 1 and 4, England; 2, Scotland; and 3, Ireland, complete with the lion gardant of England and the unicorn of Scotland as supporters.
That display of arms is not that of Elizabeth I: Quarterly: 1 and 4, France modern; 2 and 3, England, and whose supporters were the lion gardant of England and the red dragon of Wales and the Tudors.
It's a small thing, really, and fleetingly seen in passing, I suppose, but it is also exactly the sort of thing that someone with an interest in heraldry (like me, for example) would catch.
Other than that, it's a very nice rendition of the Royal Arms (as used today), and it certainly didn't ruin my enjoyment of the episode; it did, however, distract me a little as it caught my eye.
Posted by David B. Appleton at 2:00 AM