Royal Arms, But Where Is That Sinister Supporter From? 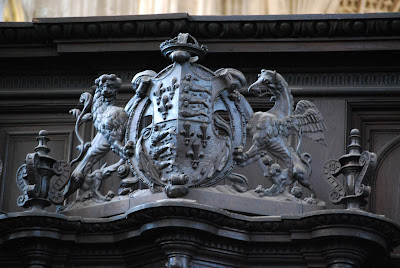 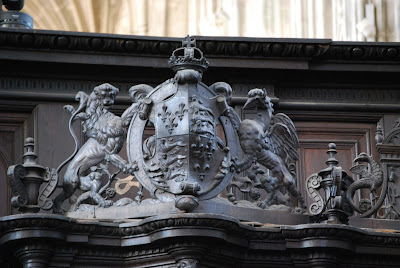 "A griffin?", you ask. confusedly. "Where does a griffin come from to be a Royal supporter?"
After conducting some research in Michael Siddons' four-book set, Heraldic Badges in England and Wales, it would appear that a griffin was used as a supporter by Anne Boleyn, whose father, Thomas Boleyn, Earl of Wiltshire and Ormond, used male griffins as supporters (taken from the Butlers, Earls of Ormond).
The griffins depicted here are clearly not "male griffins", which have no wings but do have groups of sharp spikes coming from their bodies.
Despite the fact that these are your usual (if I may use that term about an imaginary monster) griffins, and not male griffins, I can find no other likely origin for a griffin supporter with the Royal Arms other than Henry VIII's second wife, Anne Boleyn.
What do you think? Does this supporter come from Anne Boleyn, or from somewhere else?
Posted by David B. Appleton at 2:00 AM