Armorial Memorial to a Daughter and Wife


There are almost always some issues with traveling to foreign climes and taking lots of pictures of heraldry and then coming home and trying to identify to whom the arms belong. This is, at least in part, because the people who write the guidebooks are aiming at the "typical tourist" audience, and often glide over, or even leave out completely, some of the memorials, etc., that I am particularly interested in. (Admittedly, it's not as tough on me in Roskilde - where photography was allowed - as it was in St. Paul's Cathedral in London, where photography is not allowed in the crypt, and none of the guidebooks I could find had a photograph of Admiral Jellicoe's tomb there with his arms carved into its top.)

And, too, many memorial inscriptions are in Latin, which I don't read, and worse, contain abbreviations, which I also can't read.

Nonetheless, I take the pictures and I do the research when I get home, and frequently (not always, but often) I can determine who the memorial is intended to remember, and learn at least a little about his, or in this case, her, life. 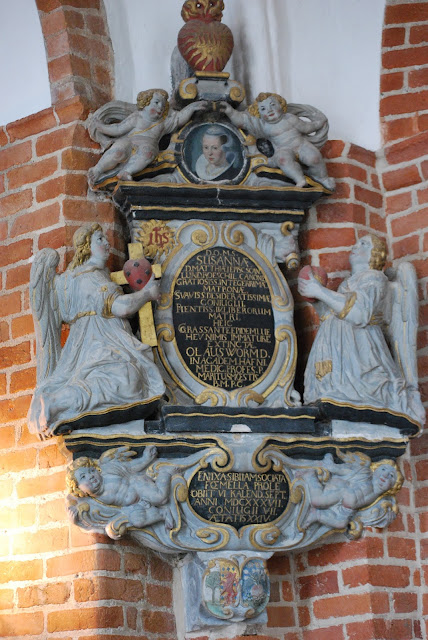 This armorial memorial, complete with angels, putti, and a portrait, as well a a lot of religious symbolism, is that of Susanna Madsdatter Medelfar, the daughter of Mads Jensen Middelfar and Inger Jakobsdatter Leth, and who was the young wife of Ole Willumsen Worm.
The large central oval gives us a lot of information, in Latin, with abbreviations, about her, more about her father, and some about her husband. 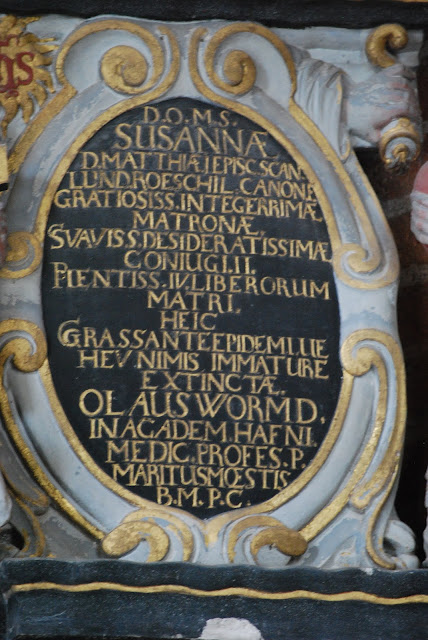 The lower oval gives us some more information about her, including the fact that she was only 24 in 1637 when she died, and had been married for seven years. 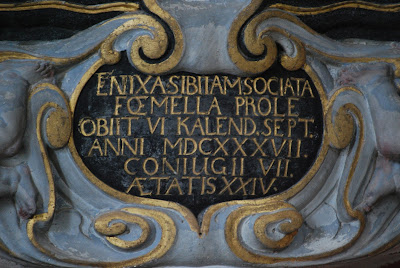 And way down at the bottom we find the heraldry which was the real attraction for me: 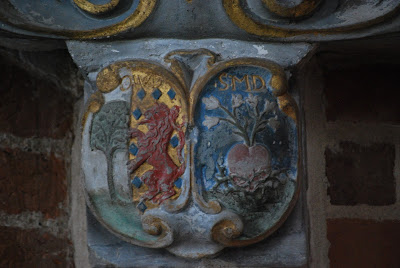 On the left we have the arms of Ole Worm (Per pale: Argent a tree proper issuant from a terrace vert; and Or semy of lozenges azure a lion rampant gules) and those of Susanna, or more properly those of her father, Mads Middelfar (Azure a heart gules issuant from a crown of thorns (or a bramble bush) sable issuing two branches of lilies argent slipped and leaved proper - as best as I can make out). Each shield has the initials of Ole and of Susanna carved into it in chief. (Again, you can click on the image to see a larger, more detailed photograph which shows the initials, and the arms, more clearly.)
Posted by David B. Appleton at 2:00 AM